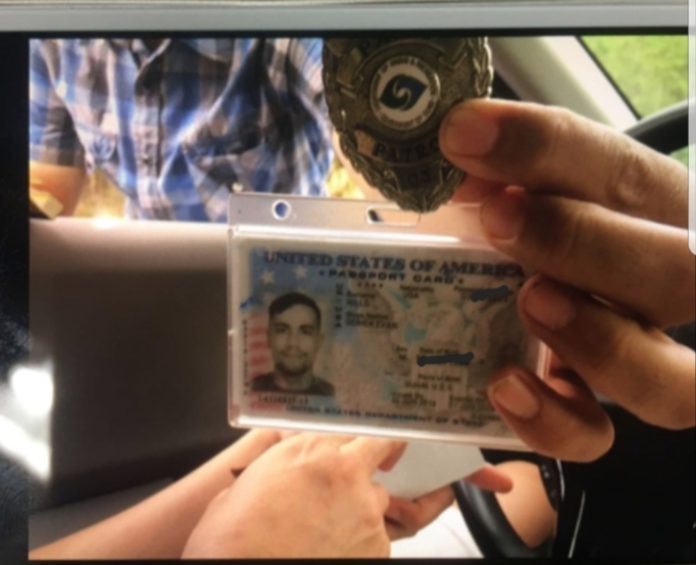 Guam – Another familiar face in politics has once again landed in the spotlight as photos circulating allegedly depict Derick Baza Hills scamming a tourist in Inarajan.

Yesterday accusations against Derick Baza Hills surfaced on social media alleging he swindled a tourist out of $40.00. He has since denied those allegations with a social media post of his own.

PNC received two photographs related to an alleged scam.  Both can be found on social media. One depicts a man standing at the driver’s side door reaching into a vehicle while holding a badge and a Passport Card identifying the holder as Derek Baza Hills.

“Derek Baza Hills pulls over a Korean tourist in Inarajan. Demanded $40.00 from her or he will take away her driver’s license. Identified himself as a police officer. Korean tourist gave $40.00 to him then he issued her a receipt for illegal speeding,” a caption of the picture reads.

The second photo is of the alleged receipt for $40.00 pre-dated for April 30, 2018. Also on the receipt is a note indicating Parks and Recreation as the citing authority. The receipt is allegedly for illegal speeding and signed with what appears to be the initials D.H.

GPD Spokesperson Sgt. Paul Tapao confirms that a complaint has been filed. The complaint was filed with the Guam International Airport police by the Korean tourist. An investigation is ongoing.

He further states that GPD and other law enforcement officers do not ask for any payments related to fines.  Hills has also taken to social media to deny the accusations.

“Shame I’m being framed. I’m taking care of my grandfather and mother at GMH ER. It’s a true shame using my stolen I.d and today’s not even the 30th. I’m no where near Inarajan! How sad. Friends and family please pray for my Mom as she suffers a severe asthma attack and my grandfather as he’s 83 and I’m doing my best than to play politics with this silly games,” he wrote on his Facebook page.

On Monday, Hills also spoke with Patti Arroyo from Newstalk K57 to deny the allegations.

“The situation is very simple to say that in my Facebook post I posted that I am being framed because I made a complaint about almost a year and a half ago with Sgt Guzman about several items being stolen from my vehicle. I still have yet to get that police report and several of those items included my wallet and other things in my vehicle so the thing is now I was never near Inarajan on that day that I am being accused of,” explained Hills.

Hills says the hand in the picture is not his, adding that he has an individual who can coraborate his alibi, sharing he was instead in Agat.

“Going around social media, I was told there was a picture I’d of my passport now that, is part of the items that I am looking for. Unfortunately someone now has it but to claim that I am a police officer and yet it’s a Parks and Rex’s badge I believe is being used it’s kind of ironic…I can not speak more than what the picture says,”said Hills.

Hills was a former political candidate who unsuccessfully bid under the Democratic party for a seat in the 2014 Legislature. The following year he attempted to run for Vice Mayor of Agat but did not garner enough votes.

Since the end of his political career, Hills has managed to stay in the spotlight by racking up several criminal offenses. On Patti’s show she also addressed allegations of drug use.

“The question I have for you is do you have a drug problem,” Arroyo asked.

“No absolutely not, I have to say that yes I am still going through the process and system. And it has taken this long I can not force the judge to make a decision or the attorney generals office to make the decision right away but you know I am being patient and I am following the process. But no I don’t, I have been strictly watched over by my mother,” responded Hills.

Current cases against Hills include forgery relative to a fake prescription, conspiracy, possession of a scheduled two controlled substance and two separate theft related offenses, one of which was filed in District Court.

Hills contested the findings of the drug test and a urine sample was sent for further testing, coming back confirming the findings.

In court Hills continued to deny using drugs as a result Judge Sukola has set a hearing on Wednesday.

According to probation Hills would have served 5 to 10 days incarceration for the violation. However, Sukola notes that because he continues to deny the allegation he now faces revocation of his release.