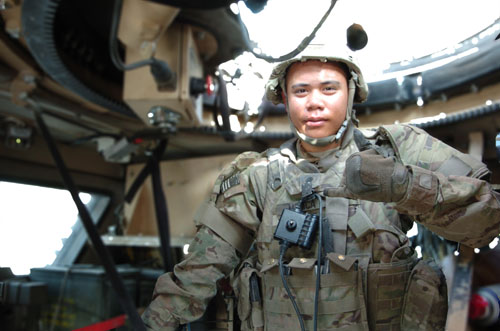 CAMP EGGERS, Afghanistan – [DVIDS]: Far, far away, there is a league of islands praising its sons and daughters for something never done before.

Sixteen soldiers from the Commonwealth of the Northern Mariana Islands (CNMI), members of the Guam Army National Guard’s 1-294th Infantry Regiment, embarked on a historic quest four months ago. Just as the Guam Guard makes history on its Operation Enduring Freedom mission, so do these 16, for another purpose.

They’re among roughly 600 island warriors dispersed throughout Afghanistan, supporting the NATO Training Mission-Afghanistan’s role in training, advising and assisting Afghan security forces. Yet, they come from an even smaller population, from the CNMI islands of Saipan and Tinian.

“We are all Guam National Guardsmen. We eat, sleep and fight together,” said Command Sgt. Maj. Mel Hennegan, Task Force Guam’s command sergeant major. “We’re all a part of the battalion no matter where we’re from.”

[Spc. Ken “Mojo” Mojica is a member of Headquarters-Headquarters Company, 1-294th Infantry Regiment, Guam Army National Guard, and a resident of of the island of Tinian. He’s part of a group of 16 from the Commonwealth of the Northern Mariana Islands participating in an historic Operation Enduring Freedom mission. (Army National Guard photo/Sgt. Eddie Siguenza) (Released)]

The islanders’ history with the Guam National Guard began after a 2009 recruiting program in the Northern Mariana Islands. In 2010, about 25 CNMI citizens enlisted into the Guam Guard. They maintain residence in the CNMI, but take an approximately 30-minute flight to Guam for monthly training.

Of those 25, 16 are now in Afghanistan, each making their first active duty deployments. The majority are in their 20s; one is an officer. Task Force Guam mobilized in March, but didn’t land on Afghan soil until April.

“This is something very honorable for them. They’re taking it upon themselves to seek a better life,” said 1st Lt. Joey Togawa, executive officer, Charlie Company, Task Force Guam and San Vicente, Saipan resident. “All of them want to do the right thing out here. Not just for the people here, but for their families at home.”

Togawa joins 13 others from Saipan. Two Guardsmen – Spcs. Hainy Borja and Ken “Mojo” Mojica – are from Tinian, an island with a population of about 3,000. Togawa was born on Guam but moved permanently to Saipan for his civilian employment.

Not all CNMI residents deployed. Some remained as members of other Guam Guard units, including logistics, communication and the 721st Army Band.

To add to this group’s history, there’s a father-daughter combination aboard. Spc. Ivan Igitol and his daughter, Brittney, also a specialist, are united in heart but separated in distance. Ivan runs missions out of Camp Eggers, while Brittney is based at Kandahar, approximately 300 miles away.

“The way we see it, we’re from the CNMI but we’re part of the Guam Guard. We carry the (Guam) patch,” said Igitol, 48, of Matuis, Saipan. “We know we represent Guam, but we’re representing the CNMI as well. Guam will always be a part of us.”

The senior Igitol serves as a mission coordinator. He tracks soldier movement for Task Force Guam throughout Afghanistan.

The 16 Soldiers form the largest group of reservists to ever deploy from the CNMI. Of them, four are women: Spc. Tiffany Santos, Spc. Rita Taitano, Spc. Delorina Rabauliman and the younger Igitol.

Fifteen islands make up the CNMI, but only three – Saipan, Tinian and Rota – are permanently inhabited. Based on the 2010 census, the Commonwealth has a population of 53,883. In comparison, the software company Microsoft employs about 91,000 worldwide, almost 60,000 just in the United States.

The Northern Mariana Islands, Guam included, were cornerstones of this Pacific region during World War II. Japan’s occupation of the islands brought U.S. forces to this region. The U.S. recaptured Guam July 21, 1944, then regained Saipan and Tinian days later. Tinian provided the launching point for the famous Enola Gay, the plane that dropped the atomic bomb on Hiroshima, Japan, in 1945.

“We’re out here doing what we have to do. We’re going to get the mission done and go back home,” said Spc. Nathaniel Mateo, 22, of Garapan, Saipan. “We just have to do our missions right. Just do what we’ve learned.”

Mateo is a driver for Charlie Company. He’s already run countless missions in a short time. On his driving experiences throughout Kabul, Afghanistan’s capital, Mateo explained, “It’s crowded, crowded, crowded. They don’t have traffic like this back home.”

As historic as this is, says Togawa, the group isn’t concerned so much about that. They’re concentrating on the mission at hand. They understand the dangers of this deployment and are fulfilling their responsibilities accordingly.

“Our soldiers know they need to stay focused out here,” Togawa said. “I have a lot of respect for them for their sacrifices. They want to be part of something bigger than themselves, and make a difference for their island. They could be sitting at home and going nowhere.”