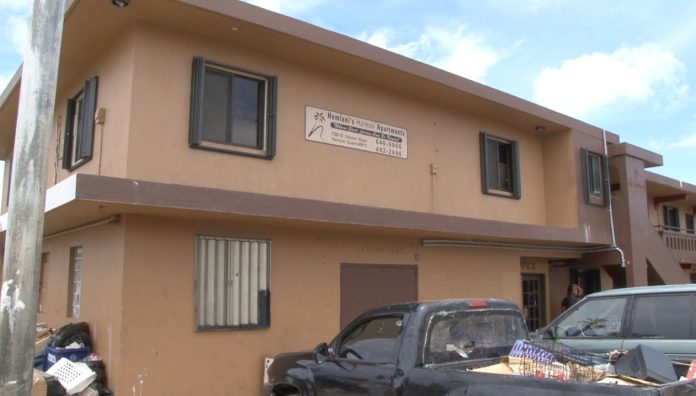 Guam – The Wednesday morning attack on a police officer at the Hemlani apartments in Harmon has resulted in the arrest of two men and three male minors.

The following people were arrested:

Charges: Aggravated assault/ Assault/Possession and use of a Deadly Weapon in the Commission of a felony/Assault on a police officer/Disorderly Conduct

Charges: Rioting, Crimes against the community

The following 3 male minors were also taken into custody and remanded to DYA:

Charges: Assault on a police officer, Aggravated assault, Curfew violation, Beyond Control, Unsworn Falsification, Disorderly Conduct, Use of a deadly weapon in the commission of a felony

This most recent act of violence and assault on a police officer at the Hemlani apartments set off a chain of events that has the Guam police department rethinking their strategy on how to battle crime in the now infamous apartment complex. So far 2 adults and 3 minors have been arrested.

A little after one in the morning a Guam police officer was assaulted by a group of people at the Hemlani apartments in Harmon. The officer was responding to a disturbance when he was struck in the head with a metal chair while gathering evidence. After an attack on one of their own, GPD Chief J.I. Cruz says its time to change the approach the force is taking on crime in the Harmon/Hemlani Apartments area.

“We see this more also being a social issue, a social standpoint we need to take, as such we are working with different government entities to address the issues and concerns and the dynamics that exists at the Hemlani Apartment,” said Cruz.  “It’s not enough just to address the issue that happened this morning, otherwise we are going to continue to go back there, we have to address this from a standpoint that takes this to another level and really address what are the issues and concerns there.”

When pressed, Cruz would not elaborate on what a ‘holistic approach’ would entail. In the past 5 days, there have been three incidents at the Hemlani Apartments, starting with a stabbing on Saturday and a bomb threat on Tuesday.

But PNC files show a history of violence at the complex, dating back at least to 2010. PNC files show everything from arrests for selling of spice, to homicides, various assaults and even a riot in October of 2014, where three men were arrested for making homemade weapons and rioting in the complex.

Either way, the most recent attack on a police officer at Hemlani has triggered responses from a number of agencies who swarmed the complex, today questioning residents about the incident.

Vinod Hemlani, co-owner of the Hemlani apartments, tells PNC he’s very sorry an officer got hurt. He says he has evicted eight or nine tenants who were connected with the crime. He says most of the individuals involved were 15 years old and were drinking.  Additionally, Hemlani says he is meeting with GHURA later today to discuss the safety of the GHURA residents housed in his complex. Hemlani says his complex houses some of the lowest income families on Guam.

Currently, the Hemlani Apartments does not have any security cameras, but the owner says he will be installing 16 cameras around the complex.

“There’s a potential for charges that include assault on a police officer, disorderly conduct, public intoxication, minors in consumption of alcohol, aggravated assault, jurisdiction over adults and possession and use of a deadly weapon in the commission of a felony,” said Cruz.

Tamuning Mayor Louise Rivera tells PNC that her office has responded to calls of burglary and vandalism at the Hemlani apartments on numerous occassions. She says her office often houses some of the children who live in Hemlani Apartments during the day while their parents are at still at work.