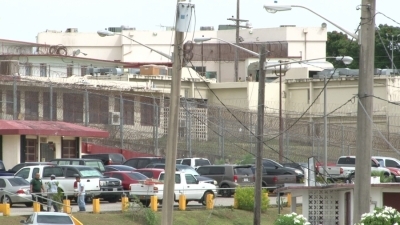 DOC Deputy Director Kate Baltazar says the hole could also be due to natural wear and tear.

Guam – The Department of Corrections has launched an investigation into a hole found in the perimeter fence.

DOC Deputy Director Kate Baltazar said, “as you know the Department of Corrections has several layers of fencing. This particular perforation was discovered in an inner fence line by our Special Ops, our Special Operations Response Team during a perimeter check.”

Perimeter checks are done fairly frequently and according to Baltazar, the hole was found in the early evening on July 8.

“We can’t speculate at this time. We are not ruling anything out even though it is an inner fence. We are taking it very seriously. It’s not a very large perforation it could be anything,” she said.

The Department of Corrections is an old facility and Baltazar says it could be wear and tear.

She adds, “We have not found any contraband. We have not had any other incidents with inmates or detainees due to this perforation in the fence. We do have our camera systems operable always including the 360 camera.”

The prison recently installed 16 cameras, including a 360 camera with a bird’s eye view.  This is not the first time a hole in the fence was discovered. In March of 2013, DOC was placed on lockdown following the discovery of a 12 inch by 12 inch hole in the perimeter fence located on backside of the domes.

Unlike that incident, Baltazar says DOC is fairly confident that the hole is an infrastructure issue. Baltazar confirms that an internal investigation is underway. She adds that arrangements to repair the hole have been made.