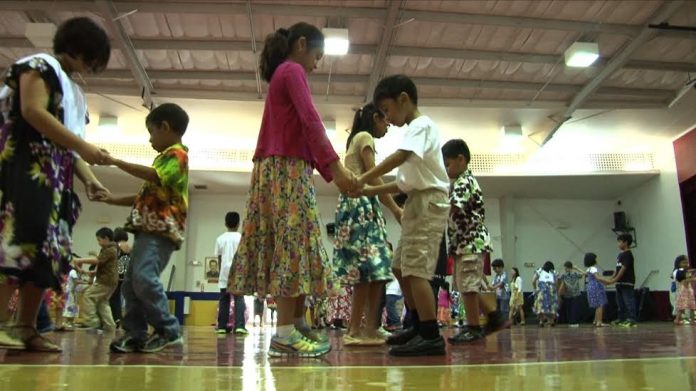 There was a big fiesta at Dededo today! In celebration of Mes Chamorro, Santa Barbara Catholic School students enjoyed a fun-filled day of activities while learning about the Chamorro culture.
The Home of the Spartans sure know how to throw a Chamorro Day event!

/YO4ftQY5m60
Santa Barbara Catholic School students danced the Cha Cha, competed in coconut race games, and learned about local legends. Teacher Jenice Cabe says the 8th graders were in charge of teaching the younger kids.
Cabe says, “They’re teaching them about the legends of Guam through shadow puppet theater. We also have weaving going on and Senator Frank Blas Jr.’s War Survivor Memorial for our 8th graders.”
First, we visited the gym. SBCS Kinder Teacher Terry Scavetta says, “Our kinders are dancing with the 5th graders. The big kids and teaching them the Cha Cha and they’re really having fun.”
Next we attended the weaving class. Students Joanna and Chloe tell us that they were taught how to weave coconut leaves into a bracelet, a Cross, and even a centipede.
From the many different activities planned throughout the day for the Spartans, Cabe says this is all about teaching the younger generation the Guam culture.
Cabe says, “We need to teach them about the culture because it’s who they are. We’re such a mixed plate of people on island that they need to know who they are as Guamanians so we try to perpetuate that with the children.”