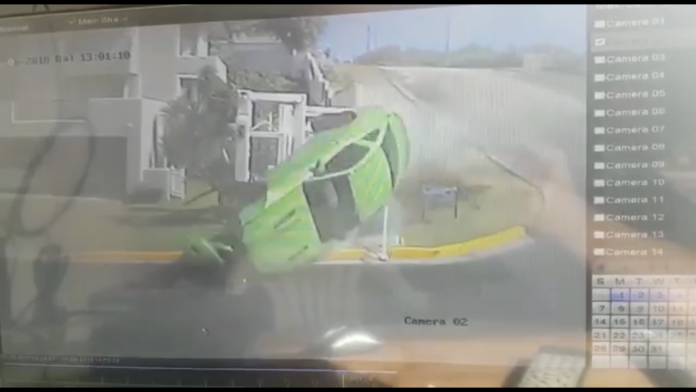 The driver’s B.A.C. registered at more than twice the legal limit, according to police.

Guam – A high-speed crash into the garage of a home in Barrigada Heights was caught on camera and the man police say is responsible is now behind bars for DUI.

The crash, as seen on a surveillance video that made its rounds on social media, happened in broad daylight. A green Ford Mustang is seen in surveillance footage speeding down the hill and then careeing into the garage of a residence.

A magistrate report indicates the dangerous crash happened at around 1 in the afternoon Saturday.

According to police, the driver of the Mustang was under the influence of alcohol with a blood alcohol content level of more than twice the legal limit.

The individual was identified as Trevor Montgomery Moore, 21, who police say reeked of alcohol and had blood shot watery eyes. When interviewed by police, Moore allegedly claimed to have only consumed two bud light platinum beers.

Police also say that Moore had a passenger in the vehicle at the time of the crash who complained of pain.

Moore was charged with felony DUI with injuries and DUI as a misdemeanor. He was booked and confined.