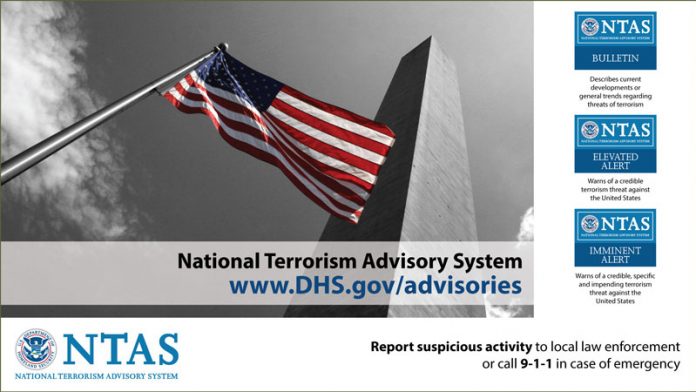 The current terrorist threat assessment posted on the U.S. Department of Homeland Security’s website states that “at this time we have no information indicating a specific, credible threat to the Homeland.”

The assessment is listed as a ‘Bulletin’ which is the lowest level public public threat advisory issued by Homeland Security under its new threat assessment system.

This latest terrorism alert ‘Bulletin’ will expire “on or before” January 18.

It was posted Saturday, January 4th, following the January 2nd assassination of Qassem Soleimani in a U.S. drone attack.

Soleimani was the Iranian commander of Iran’s Islamic Revolutionary Guard (IRGC) Corps Quds. The United Sates designated Iran a “State Sponsor of Terrorism” in 1984 and the IRGC was declared a Foreign Terrorist Organization in April of last year.

In a release today, Guam Homeland Security Advisor Tim Aguon is quoted as saying “while here is no specific, credible (terrorist) threat to the United States at this time … it is important for the community to be aware of the current situation with foreign nation states and remain vigilant.”

In related news, The U.S. Department of Homeland Security has simplified its terrorism alert advisories to “more effectively communicate information about terrorist threats by providing timely, detailed information to the American public.”

The new threat advisory system will consist of three types: Bulletin, Elevated Alert and Imminent Alert. ‘Bulletin’ is the lowest form of advisory and ‘Imminent’ is the highest.

The new system will replace the current color-coded alert system. Details about the new system have been posted on the U.S. Department of Homeland Security website.

“If You See Something, Say Something”