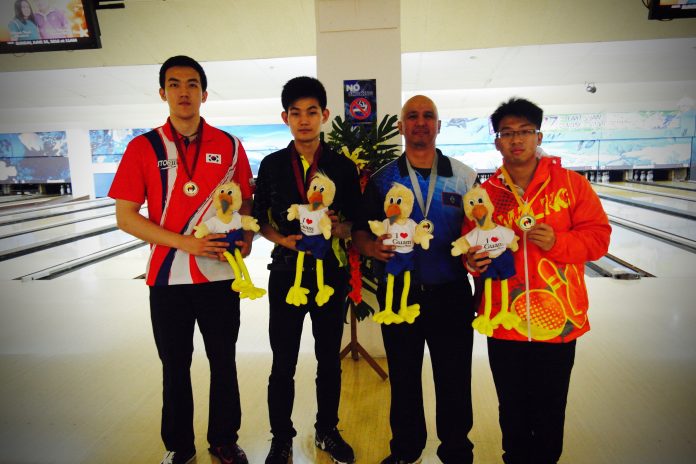 TAMUNING, GUAM – Hong Kong’s Tony Wong opened the gold medal match with a turkey to take an early lead over 2nd seed Ricky Duenas of Guam.  Mid way through, both bowlers begun to struggle as Duenas left bag to bag splits on the even numbered lane.  With the frames winding down, Wong capitalized on the misfortunes of Duenas to extend the lead and never looked back claiming the first of two gold medals of the championship 211-171.  Duenas settled for the silver medal. Tony Wong got the better of top seed Qi Wang Kang in the semi-final matchup as Wong strung five strikes in a row for a 236 game to advance to the finals against Qi’s 188.  Guam’s Ricky Duenas withstood a late surge by Korea’s Lee Ga Ram to advance to the finals as he slipped by the lower seed 219-213.

Qi Wankang of China topped the field after the six game event with a 1433 total, averaging 238 pins per game and posting a high game of 297.  Guam’s Ricky Duenas was 54 pins adrift in second followed by Lee Ga Ram of Korea and Tony Wong of Hong Kong who sneaked in to the final slot for the match play. Wong bowled a perfect game of 300 during the fifth game to put him in contention after a rough start but managed to get by team mate Alex Yu, taking the last qualifying post by a mere five pins. The women’s gold medal match turned into a strike fest between 2nd seed Kim Mi Ae and 4th seed Lee Young Seung.  The match was tight throughout the game until Kim Mi Ae left a pin seven on the tenth frame that opened the door for Lee.  Needing a double in the final stanza, Lee calmly delivered before breaking a nine count on the final fill frame for a 256-248 victory.  With the win, Lee claimed the singles event gold while Kim settled for silver.

Lee used a four bagger in the early frames of the semi-finals match to eliminate top seed Kim Su Bin 212-193 while 2nd seed Kim Mi Ae used a similar method in ousting 3rd seed Jang Ha Eun 228-194.  The win set up the gold medal match between Lee Young Seung and Kim Mi Ae while Kim Su Bin and Jang Ha Eun settled for the bronze medal. The Korean women showed their dominance of the sport as their six bowlers finished in the top seven.  Kim Su Bin led the way with a 1329 total followed by Kim Mi Ae, Jang Ha Eun and Lee Young Seung.  China’s Kong Min was the only competitor to penetrate through the Korean line up finishing in fifth place, 39 pins out of the cut.