Honiara, Solomon Islands – Special venues under construction in and around Honiara are nearing completion in preparation for the 11th Festival of Pacific Arts, 1st – 14th July this year.

Dr Elise Huffer, Culture Advisor, Human Development Programme, Secretariat of the South Pacific Community (SPC), who attended the Council of Pacific Arts and Culture meeting in Honiara in March, said that the Solomon Islands National Festival Committee’s demonstration of their preparations indicated that the venues would be completed well in advance of the Festival opening ceremony.

Dr Huffer said that with the venues scheduled to be ready ahead of time, the host country is waiting on confirmation of participants that will be in the regional delegations.

[Solomon Island carvings show the way to the Festival Village]

“The Cultural Village is already absolutely spectacular. It will be the heartbeat of the Festival,” she said.

“All the different Provinces are building the houses in the traditional manner. They come in a group, and in three weeks or less, they put up the house, have a feast, then leave.  Then the next group comes in.”

Traditional building materials and techniques are also being used to construct an auditorium in the museum grounds with a stage, seating, and a visual arts display area. Visual arts will also feature at the National Gallery. 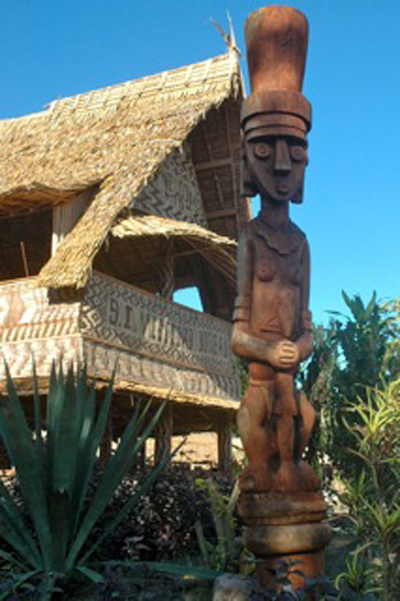 During the Festival, the venues will be subject to pest surveillance and capture systems as a part of precautions to prevent the introduction of invasive pests and diseases that could threaten the livelihoods of Solomon Islanders, as well as the long-term national biodiversity and food security.

SPC Land Resources Division (LRD) Information Officer Mr Emil Adams told the Council meeting that as with any large, international gathering, quarantine and biosecurity are important issues. Thus, there is a focus on a public education and awareness campaign within the Solomon Islands to prevent the introduction of new pests.

“Regional delegates will be bringing costumes, carvings, handicrafts and food items to the Festival. To prevent pests piggybacking across national borders on these items that have a high quarantine risk, SPC is working in collaboration with regional heads of quarantine and the Pacific Plant Protection Organisation (PPPO), just as the organisation coordinated the regional quarantine awareness for last year’s Pacific Games held in New Caledonia.

“If delegations have their items fumigated on departure and can show the correct documentation upon arrival in the Solomons, they will be processed through quarantine and customs much more quickly,” said Mr Adams.  “Also, Council members are aware that most fresh food items and costume materials can be sourced in the Solomon Islands, negating the need to bring them, and can advise their delegations accordingly.”