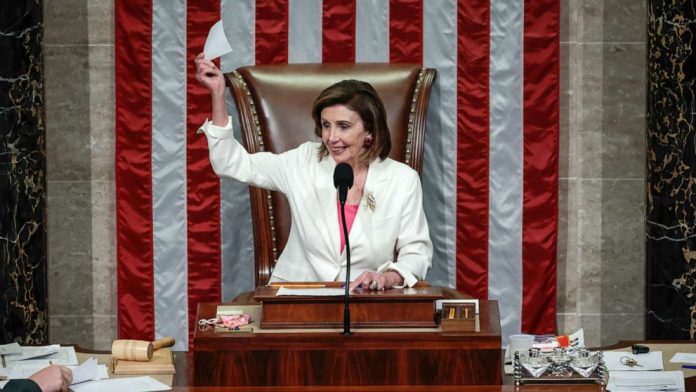 As the count crossed the threshold to pass, Democrats on the floor applauded and chanted “Build Back Better!” and “Nancy! Nancy!”

The social spending measure would generate the largest expansion to the social safety net in 50 years and contains $555 billion for climate and clean energy investments. It would:

Biden called Pelosi from Walter Reed National Military Medical Center in Bethesda, Maryland, where he was getting a physical, including a routine colonoscopy, to congratulate her.

“Above all, it puts us on the path to build our economy back better than before by rebuilding the backbone of America: working people and the middle class,” Biden said in a statement. “For the second time in just two weeks, the House of Representatives has moved on critical and consequential pieces of my legislative agenda,” he said.

Now that it’s passed the House, the Senate is expected to amend the proposal in the coming weeks after the Thanksgiving recess as Democratic Sens. Kyrsten Sinema and Joe Manchin have not committed to the package in its current form.

Taking a victory lap, Pelosi downplayed any potential disputes with Senate Democrats over the final product and projected total confidence that the bill will make it to Biden’s desk following any changes in the Senate.

“It’s called the legislative process,” Pelosi said. “At the end of the day, we will have a great bill.”

Since congressional Democrats plan to pass the measure through reconciliation — a lengthy budget process that would not require any Republican support since Democrats have a narrow majority in both chambers — the legislation still has a long way to go, including back to the House, before it would hit Biden’s desk.

In the House, Rep. Jared Golden of Maine was the only Democrat to oppose the package, signaling opposition to a provision to raise the federal tax deduction for state and local taxes that could benefit high-earning homeowners. Democrats could afford to lose three votes and still pass the legislation. Not a single Republican supported it.

Overnight, House Minority Leader Kevin McCarthy, R-Calif., took the floor for more than eight hours to rail against the bill and Democrats’ agenda, breaking a record previously held by Pelosi for the longest House floor speech, knocking Democrats off their plans to approve the measure late Thursday evening, in a show to his conference that he’s fighting for the GOP on his quest to become speaker.

“I know some of you are mad at me and think I have spoken too long, but I’ve had enough. America has had enough,” he said, rallying his conference after a week of intraparty tensions over his leadership as the party seeks to recapture the House.

When Pelosi took the floor on Friday morning ahead of the full floor vote, she took a swipe at McCarthy’s lengthy speech.

“As a courtesy to my colleagues, I will be brief,” she said, wearing an all-white suit to mark the occasion. Pelosi said Democrats are “proud to pass this legislation under President Joe Biden.”

Earlier Thursday, the nonpartisan Congressional Budget Office estimated that the total Democratic package would add $160 billion to the national deficit over the next 10 years, an assessment requested by some moderate Democrats ahead of any vote to send the Build Back Better Act to the Senate.

“Those of us who serve on this date will be able to tell our children and grandchildren we were there when the Congress passed one of the most transformational bills in the history of the Congress,” House Majority Leader Steny Hoyer, D-Md., said on Thursday.

Republicans, meanwhile, assailed Democrats over the scope and cost of the package — given Biden’s initial pledge that it would cost “zero dollars” — and predicted it would further fuel inflation.

Speaking through the night and early morning on the House floor, McCarthy repeatedly likened Biden to President Jimmy Carter, the one-term Democratic president who presided over inflation and rising gas prices in the late 1970s. Republicans repeatedly said Democrats were overstating their mandate from the 2020 election and argued that a Republican victory in the Virginia gubernatorial race earlier this month signaled unease with Democrats’ spending plans.

“Nobody elected Joe Biden to be FDR,” McCarthy said.

McCarthy was heckled repeatedly by Democrats over the course of his speech, and lawmakers shouted at each other from across the chamber. Rep. Tim Ryan, D-Ohio, shouted at McCarthy at one point, “No one’s listening!”

As Republicans and Democrats flitted in and out of the chamber and wandered around to stretch their legs, McCarthy riffed on everything from foreign policy and not being able to afford a Tesla, to the 1984 film “Red Dawn” and China’s development of hypersonic missiles. He also lamented that former President Donald Trump did not win a Nobel Peace Prize for brokering the Abraham Accords.

Democrats mocked McCarthy’s speech on social media, while Republicans cycled in and out of the chamber to fill the seats immediately behind the California Republican in a show of support.

Democratic members of Congress are also planning to hold 1,000 events before the end of the year to make clear to Americans what’s in Biden’s infrastructure plans.

“I’m confident that the House is going to pass this bill. And when it passes, it will go to the Senate,” Biden said. “I think we’ll get it passed within a week.”

McCarthy blasted Pelosi at his press conference on Thursday and said the reconciliation bill will “be the end of their Democratic majority.”

While the already-passed bipartisan infrastructure law itself and its individual components — rebuilding and repairing bridges, ports and roads, expanding broadband internet, and more — are widely popular, a new ABC News/Washington Post poll shows Americans aren’t giving Biden credit for championing the law and getting it through Congress. The president’s approval rating is at an all-time low at 41%.

Pelosi on Thursday tried to defend Democrats’ “Build Back Better” proposal from criticism over a key tax provision that has angered some in the caucus. Some moderates and leading progressives have criticized plans to undo a cap on the state and local tax (SALT) deductions — a reversal of Republicans’ 2017 tax law — popular in California, New York and New Jersey, given that the change would benefit wealthy suburban property owners.

A recent analysis from the Tax Policy Center found the SALT cap increase would primarily benefit the top 10% of income-earning Americans. About 70% of the tax benefit would go to the top 5% of earners, who make $366,000 a year or more, the analysis said.

White House press secretary Jen Psaki said at her briefing Thursday that the White House was “comfortable” with the SALT cap increase being included in the version of the “Build Back Better” bill on which the House is expected to vote — but she wouldn’t say the president’s excited it.

“This is a part of the bill that the president — that has been proposed, that is important to key members, as you all know,” Psaki said. “That’s why it’s in the package. The president’s excitement about this is not about the SALT deduction. It’s about the other key components of the package. And that’s why we’re continuing to press for it to move forward.”