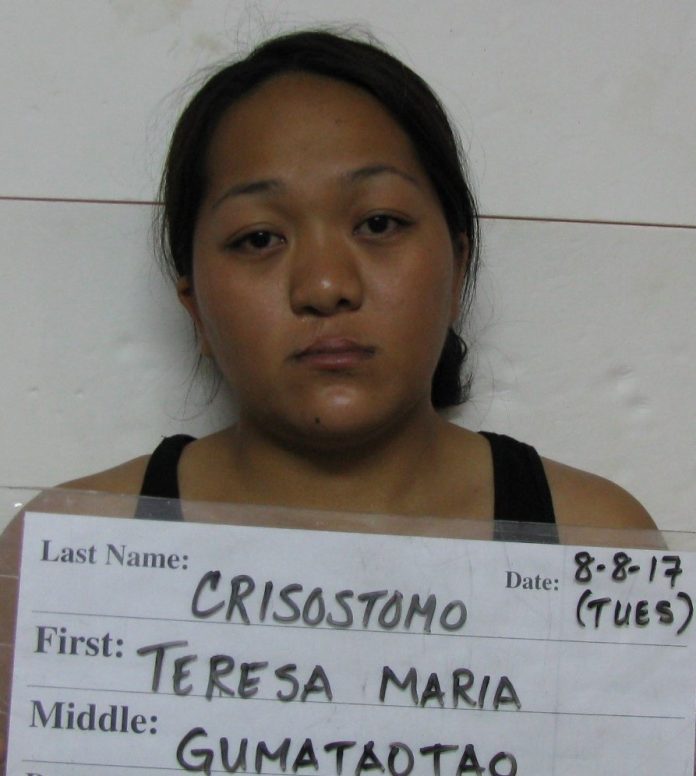 Guam – Tesesa Maria Gumataotao, was hired as a housekeeper for a family in Anigua but she did more than just clean house instead she cleaned out nearly $75 thousand dollars, worth of valuables from the home.

Tesesa Gumataotao was employed for about three weeks, before her employer noticed that items were disappearing. According to Court documents Gumataotao allegedly stole jewelry, designer bags and a wallet before her employer noticed. The victim allegedly contacted Gumataotao asking her if she had seen the purses but Gumataotao denied any knowledge. Later texting the victim that she had found the purses and would leave them in the victim’s room. The victim also discovered that all her jewelry boxes were empty and the jewelry missing. Court documents state that the victim contacted her assistant and informed her of her suspicion that Gumataotao was responsible for the theft. The assistant called Gumataotao and demanded that the stolen property be returned or criminal charges would be filed.  While Gumataotao initially denied the allegations, it is alleged that she later admitted to stealing the items. The Employer’s assistant met with Gumataotao at the Mangilao Church where she returned one “Gucci” purse and a Louis Vuitton wallet. Gumataotao allegedly stated that she pawned a diamond ring and other items at AA Pawn shop in Agana for a total of $700 dollars. When Gumataotao learned she would be arrested she allegedly attempted to flee dropping a small bag of jewelry. According to police, it wasn’t until the assistant, allegedly threatened to publicize that Gumataotao  is married to a DOC Guard that Gumataotao agreed to accompany her to the police station. According to court documents, the assistant recorded Gumataotao’s confession and would provide a copy to the police. Out of the $75 thousand dollars in valuables stolen only 7 items valued at $15, 740 dollars was recovered.