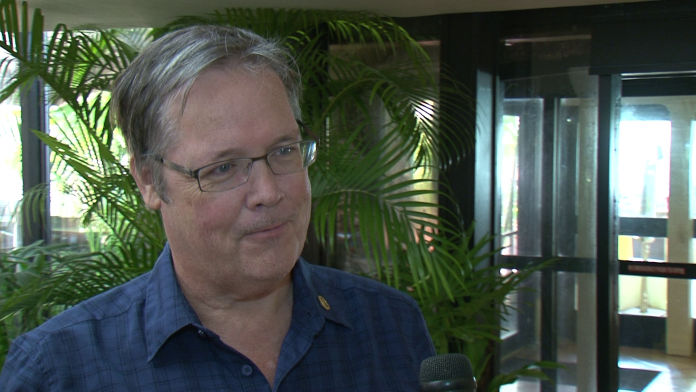 Guam – With Monday’s inauguration of newly elected Gov. Lou Leon Guerrero, Lt. Gov. Josh Tenorio and members of the 35th Guam Legislature now complete, political pundits are already offering up their views on the potential impact these newly elected officials might have.

Ron McNinch, associate professor, School of Business & Public Administration, University of Guam addressed the Rotary Club of Northern Guam and offered his hopes that with a Democratic executive branch and a Democratic super-majority in the senate, it appears the road to seamless lawmaking has been paved.

“Our leaders need to sit down and say ‘Here are our priorities and here’s what we need to do to make our government better.’ They need to mutually agree on this so there’s no quibbling or fighting back and fourth. Our fiscal problems are nothing new, but would should be new is a two-pronged approach to really get things done.”

While hopeful for this two-pronged approach, McNinch is also aware that this has not always been the case. The professor says,”Even when we had a Republican governor and a Republican legislature, it didn’t happen. Now we have a lot of women in our political governing system, and maybe they value cooperation more.” McNinch also provided insight into what could derail the efforts of our new government officials.

“The danger of a Democratic super-majority is suddenly a group of Democrats can go contrary to the Democratic governor. If they are going to be effective, they need to head off at the pass anything that can be vetoed and not send up anything that can be vetoed. There’s nothing worst than having your bills vetoed and nothing worst than the legislature having to overrule a veto, that means that process has broken down in terms of expectations.”

The meeting for the Rotary Club of Northern Guam was held at Hilton Guam Resort & Spa.