The 18-year-old from Tokyo, who recently turned professional earlier this year, finished his 6-2, 6-4 victory against the Slovak Republic native in style – with an ace that even shocked himself.

“I just wanted my serve to go in – I wasn’t particularly aiming,” Moritani said after the match through a translator. “I wasn’t expecting an ace, but it was – I was so happy. This is my first ranking point.

“When the draw was released and I saw I was going to play Hrbaty, I felt I needed to make sure I covered all shots on court and wait for his errors in order to win,” Moritani added. 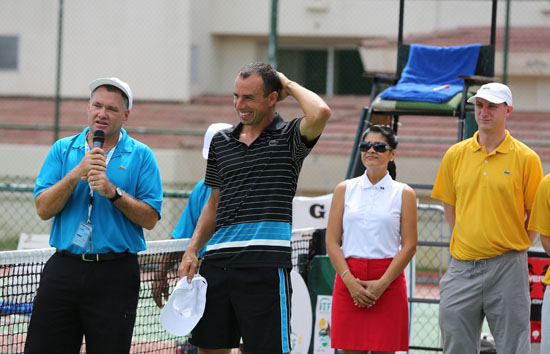 A pair of double faults in the match’s first game proved costly for Hrbaty, allowing his opponent to earn the early break. At deuce in the ensuing game, a Hrbaty unforced error, combined with an ace allowed Moritani to hold serve and take a 2-0 lead.

Hrbaty seemed to have difficulty with his first serves, eventually leading up to another service break in the fifth game. At 30-30, Moritani powered in a service return winner and later took the game on a Hrbaty double fault. 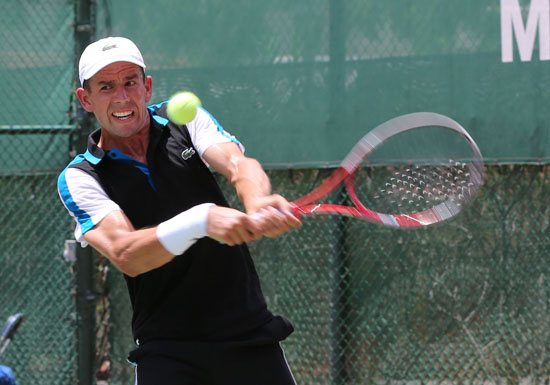 After both Moritani and Hrbaty held serve in the next games, Moritani was on the line to close out the set. An ace put him up 15-love, but a Hrbaty forehand winner, coupled with a pair of Moritani double faults gave Hrbaty double break point to stay in the set. Luckily for Moritani, a service break wasn’t in the cards as a string of Hrbaty unforced errors gave the set to the Japanese competitor.

Another early service break in the third game of the second set was key for Moritani. Hrbaty had a good chance to break back in the eighth game, eventually earning double break point when Moritani’s forehand return went long. Moritani later survived three deuces to hold serve and move up 5-3. Hrbaty made easy work of his opponent in the next game with heavy groundstrokes that set up Moritani for a pair of errors to begin the game. Later, Hrbaty forced Moritani to the net and sent in a passing shot winner for the 40-love game. A service return that went long gave Hrbaty the needed game to stay in the contest.

Moritani then dispatched Hrbaty in the next game, banking on good serves that led to errors by his opponent, followed by a final ace that left Hrbaty staring momentarily at the service line.

In doubles action, the top two seeds moved into the quarterfinals. No. 1 Yuichi Ito and Takuto Niki won 6-2, 6-2 over Crabb and partner Saketh Myneni and No. 2 Uchiyama and Bumpei Sato defeated Hrbaty and partner Patrick Davidson 6-4, 6-3. Mitsuhashi and Shiga moved into the quarterfinals with a 6-1, 6-3 victory over Vehovec and Wang, and Australians David Barclay and Brendan Moore defeated Shubert and Guam’s Daniel Llarenas 6-3, 6-2.

Llarenas, the lone competitor from Guam left in the singles bracket, will play no earlier than 12:30 p.m. against No. 7 Sato. Cepeda and partner Sinclair will play the last match of the day on Court 1 against Vakil and the Philippines’ Jacob Lagman.