SSHS Principal Beth Perez said she and her staff were glad to work with the Sailors as they moved books and furniture, painted classrooms and provided landscape support in preparation for the new school year.

“We are very appreciative of the fact that they took time of their schedule to come and join us,” she said. “We have a lot of things to prepare for and so the extra help is very much appreciated.”

Perez added that having the Sailors at the school was a testament to the relationship between the local and military communities.

“It’s a great partnership that the military personnel have with the public schools,” she said. “Especially because the students can see them, talk to them, engage in conversation, even when it comes to career choices. Many kids are curious about what they do, where they work at and so it really benefits our students as a whole.” 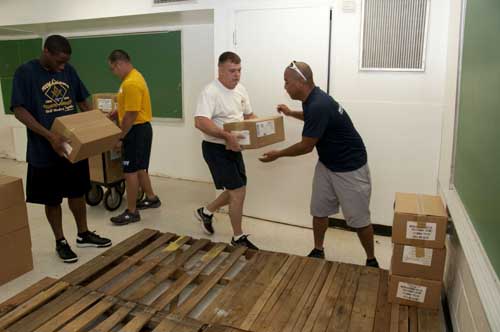 Gilliam said as a new Sailor to the island volunteering was not only a way to show support but a way to connect with a place he was unfamiliar with.

“It’s a way to understand Guam and know the community and know what’s going on,” he said. “We’re just here to help out in any way, shape or form.”