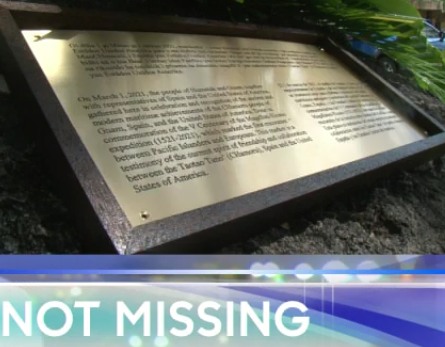 After social media posts circulated on chat groups and social media of a special historical plaque missing from Humatak bay, the Humatak mayor has cleared the air.

The plaque was given by the Spaniards who recently visited Guam as part of the Magellan circumnavigation anniversary on March 1st, which was Guam History and CHamoru Heritage day.

The plaque is supposed to accompany the original Magellan Monument, which was erected to commemorate Guam’s first documented contact with Western civilization.

It is located in Humatak which was Guam’s original capital under the Spaniards.

Public viewers were saying the plaque was stolen but that’s not true, says the village mayor Johnny Quinata.

He said that the Department of Public Works asked him to store the plaque in his office, after the ceremony concluded and residents took their pictures.

Quinata says that DPW is working to build a permanent structure.

Currently, there is a 1 by 2 piece of lumber that they screwed on to the rock.

In an interview with PNC, Quinata says that the plaque remains safe in his office.

“We have the plaque. It was never taken. I took it out after Public Works told me when it was over to put in your office, when they come back and screw it back on,” Quinata said.

The permanent structure will be made of cement and the plaque will be screwed on.

The mayor says not all details have been laid out.