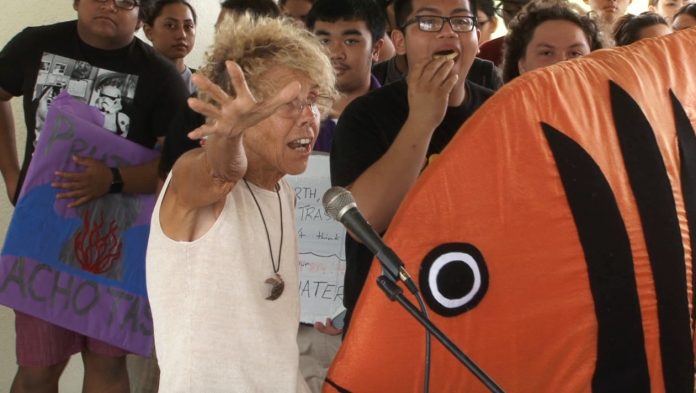 Some call it the ‘calm before the storm.’ Linda Tatreau speaks to the crowd of protesters before beginning the walk around the Governors complex and to the streets.

Guam – Hundreds of protesters gathered outside of the Governors office and stormed the halls of the Governors complex to voice opposition to the controversial Fujita culvert plan to mitigate flooding in Tumon.

Current and former students from George Washington High school’s ‘marine mania’ and many other school groups gathered to protest the plan.

Vince Campo, a member of marine mania also showed up to support the cause.

“We hope to stop the Fujita culvert and help save Tumon Bay and keep Guam a beautiful place,” said Campo.

Here’s a quick rundown of the Tumon culvert plan. Just a couple of days ago, Guam EPA (GEPA) administrator Eric Palacios made an unscheduled appearance on the Patti Arroyo show on K57 to shoot down rumors that the US EPA issued a letter to GEPA regarding the culvert plan. According to Palacios, a letter was sent, but to the Department of Public Works (DPW) not GEPA. The U.S. EPA advised GEPA, the Guam Economic Development Authority (GEDA) and DPW to put any shoreline projects, this includes the  Fujita culvert plan, on hold until certain rules and regulations are established that could affect the culvert plan.

Then, just this morning, senator Dennis Rodriguez introduced a bill asking for an all out ban on the gravity bay outlet altogether.

“What this bill does is remove, in it’s entirety, the option of the culvert, of dumping storm water into Tumon bay. It takes that off the table. It gets GEDA and all the other stakeholders back to the table to look at any other options. One of the other five options they have or any other option that perhaps was not reviewed initially,” said Rodriguez.

Earlier this week, GEDA sent out a press release saying “the controversial third phase of this project, known as the culvert, is not moving forward, this gives the legislature one year to come through with the funding they promised that would make the third phase better than what was initially proposed.”