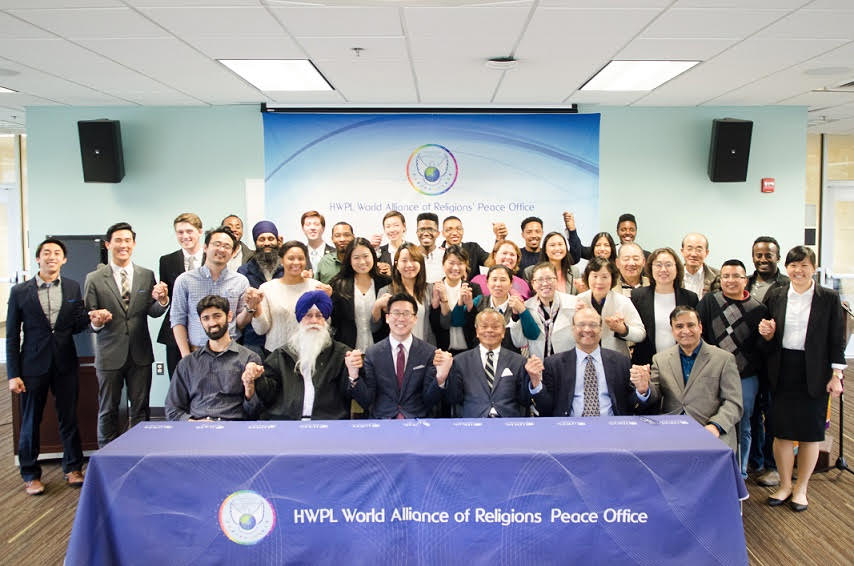 In this 3rd International Religious Leaders’ Conference, 5 religious leaders gave speeches on the significance of the interfaith dialogue for the comparison of scriptures and finding a trustworthy scripture that has been discussed in the WARP Office.

(HWPL) – About 300 religious leaders from around the world discussed ‘Cooperation for the Realization of Religious Peace’ at the 3rd International Religious Leaders’ Conference last month in Seoul, South Korea. The conference was a part of the 3rd Annual Commemoration of World Alliance of Religions’ Peace (WARP) Summit organized by Heavenly Culture, World Peace, Restoration of Light (HWPL) under the UN ECOSOC and UN DPI.

The annual International Religious Leaders’ Conference, starting with the peace agreement by religious leaders since 2014, is aiming at promoting harmony among religions through the WARP Office, an inter-religious venue for seeking the true meaning of scriptures containing principles of humanity and the role of religious leaders in establishing a world of peace. From 11 offices in 5 countries in 2014, the WARP Office has grown to 218 offices in 126 countries by August 2017. And 21 religions including Muslim, Hindu, ​Sikh, Baha’i ​as well as Christianity and Buddhism have participated in the WARP Office meetings.

In this 3rd International Religious Leaders’ Conference, 5 religious leaders gave speeches on the significance of the interfaith dialogue for the comparison of scriptures and finding a trustworthy scripture that has been discussed in the WARP Office.

Grand Ayatollah Seyed Reza Hosseini Nassab, Present Grand Ayatollah, who has participated at the WARP Office in Canada for the past two years, said “The Truth is the common spirit of all Scriptures, and it is the universal value among all religions. Finding the truth leads to the unification of all religions, and as a result, it leads to worldwide conciliation. That’s why we have been focusing on the topic of “Truth” in our WARP office discussions in the last year.” sharing his experiences with the WARP Office.

Therefore, Chairman Man Hee Lee of HWPL advocated a vision for the goals of the WARP Office by saying, “Everything that religious leaders discuss at the WARP Office must clearly be based on what is written in the scripture, which needs to be comprehensively analyzed and studied for the true alliance of religions. We have to gather all religious scriptures and work to define a trustworthy scripture with a legitimate standard. Before the scriptures are unified, religions cannot be aligned. Word is invisible, but it does a lot of work. Scriptures play the significant role in the alliance of religions.”

HWPL is also implementing the Religious Youth Peace Camp for developing interfaith reconciliation and spreading a culture of peace, where young people can experience peace as a common value ​​permeated in all religions. Starting with Cambodia this April, the Religious Youth Peace Camp held in India, Lithuania, Myanmar, and the Netherlands hosted various programs including learning about the culture and spirit of each religion and visiting each temple.

“Everyone who participated in this camp is from different religions but has created a very nice and warm atomosphere. I could get a lot of information about other religions and realized that all religions have a same destination. This will enable us to spread peace and love,” said Soyol Erdene, a participant from Hindu, left a comment on the camp.

At this 3rd International Religious Leaders’ Conference, HWPL presented its plans to cooperate with more religious leaders around the world in order to achieve interfaith reconciliation and ultimate peace through dialogue and peace culture aiming to find a trustworthy scripture through the WARP Office and develop the WARP Office and Religious Youth Peace Camp.

HWPL has offered peacebuilding initiatives: Law for Peace, Peace Education, and Alliance of Religions through its Declaration of Peace and Cessation of War (DPCW), whose 10 articles and 38 clauses pursues a global cooperation for establishing a constructive governance of peace with the participation of states and citizens. It addresses measures of peacebuilding including respect on the international law, peaceful settlement of disputes, freedom of religion, and a culture of peace through education and media.