This annual competition features 5 chef’s from hotels and free standing restaurants each preparing one course based on a collective theme to compete for best dish. This year’s competition was held on August 28, 2013, and featured a theme based on “colors”.

Each Celebrity Chef was asked to create a special course based on a color that was selected by each chef randomly drawing. Chef Mirko and his team were assigned the dessert course and drew the color “brown”.

Chef Mirko created a very special dessert titled, a “Symphony of Chocolate Decadence” which was a decadent cake with multiple layers of chocolate, sponge cake and topped with a chocolate ganache, and served with a French coffee macaroon, Guahan coconut, brown caramel sauce and musical notes drawn on the plate with milk chocolate.

This is the first year Chef Mirko has competed in the culinary contest. Not only did Chef Mirko win the overall Chef’s Cup, he also
won the People’s Choice award, which is voted on by the attendees of the event.

The annual competition is hosted by the University of Guam Endowment Foundation in collaboration with the Micronesian Chefs Association (MCA) and offers a 5-course dining experience of Cold Appetizer, Soup, Hot Appetizer, Entrée and Dessert. As each course is served votes by a panel of expert judges are tallied with the team receiving the highest total number of votes being crowned as Chef’s Cup champion. 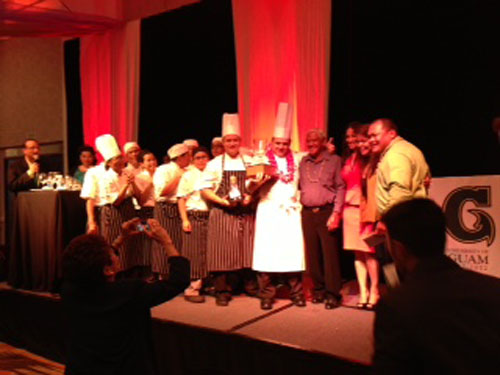 Along with the responsibility of cooking, each chef is paired with a team of local celebrities and together must create a 5-minute promotional video to attract extra points and votes for their respective course. Chef Mirko and Team Brown included local celebrities Louise Muna, Deidre Leon Guerrero and Ray Yanger. Other chefs competing for the top prize included Chef Simplicio “JR” Taga from Outrigger Guam Resort, Chef Daniel Lenherr from The Westin Resort & Spa, Chef Eddie Chien from Delmonico Kitchen & Bar and Chef Toshiyuki Nakajima from Sheraton Laguna Guam Resort. Proceeds from the event go to the UOG Endowment Foundation for the UOG Capital Campaign and the MCA for culinary scholarships.

As an ongoing celebration, Chef Mirko is inviting the local community and guests to the hotel to sample firsthand the winning dessert. The winning dessert will be offered daily in the Deli and for special orders through the month of September. For information or to place an order call 648-3882.