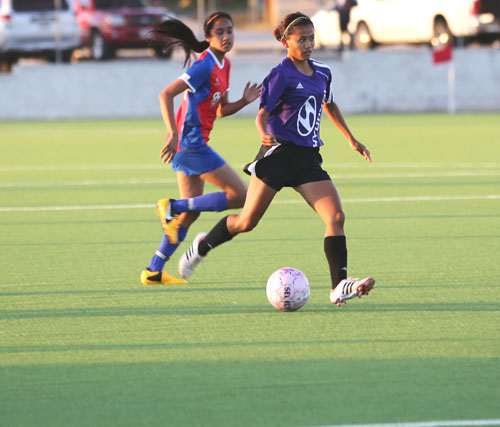 Guam – Hyundai’s Arisa Recella hammered in a shot to the right post in the final minute of her team’s match against Quality Distributors to escape with a slim 5-4 win in Week 3 action of Bud Light Women’s Soccer League at the Guam Football Association’s newly constructed upper turf pitch.

Hyundai, last season’s runner-up, held a 2-0 advantage at half time with goals from Olivia Flores and 13-year-old Shania Spindel, until Quality Distributors started to claw back in the game.

[Hyundai’s Arisa Recella keeps possession of the ball as she looks to pass the ball ahead of Quality Distributors’ Nieves Cabreza behind her in Week 3 action of the Bud Light Women’s Soccer League at the Guam Football Association newly constructed upper turf pitch. Hyundai snuck past Quality 5-4.]

Aubrienne Pangindian opened scoring for Quality in the second half wresting the ball away from Hyundai keeper Amy Besagar’s grasp to eventually get it to roll into the empty net.

Flores and Recella followed up with a pair of goals to make it a 4-1, but Quality’s Paige Surber began to wreak havoc onto Hyundai’s defense. Surber first knocked in a penalty kick awarded to her team after she was fouled in the box following a corner kick play. Next, Surber smoked defenders down the right flank and shot at an angle that snuck in behind Besagar. Surber nearly completed a hat trick moments later to knot the match at 4-all on a shot from a Pangindian pass, but after some discussion among referees, Surber was deemed offside and the goal was rescinded.

Minutes later, Pangindian was met with traffic in the penalty box and sent a pass back out to teammate Nieves Cabreza, who perfectly arched her shot for the game-tying goal.

As both teams jockeyed for possession of the ball to take shots in ensuing plays, it would be Recella who found the back of the net before the final whistle.

In other matches, the Paintco Lady Strykers remain at the top of the league standings after earning their third win in as many games with a 5-3 victory over the University of Guam Tritons. Alexy Barbe and Kim Sherman each scored a brace for the Lady Strykers and teammate Jaimee Matanane scored once for the winning team. Simie Willter scored twice for UOG and teammate Gemma Datuin scored the team’s other goal. 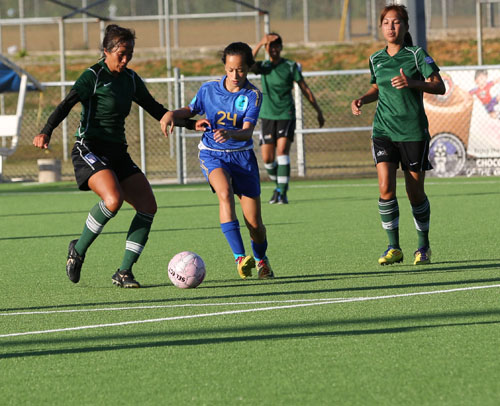 In the day’s final game, the Doosan Lady Crushers blanked Pika Soccer Club 3-0 behind a pair of goals from Shania Bulala and one from Colleen Naden. 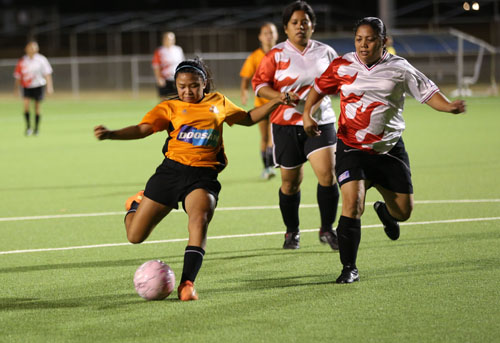 [Doosan Lady Crushers’ Shania Bulala takes a shot before a pair of Pika Soccer Club defenders are able to get to her in Week 3 action of the Bud Light Women’s Soccer League at the Guam Football Association newly constructed upper turf pitch. The Lady Crushers blanked Pika 3-0.]