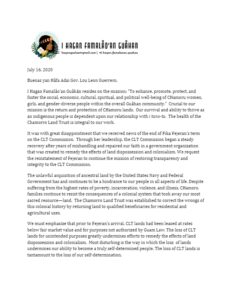 The non-profit CHamoru woman’s organization I Hagan Famalåo’an Guåhán has sent a letter to Governor Lou Leon Guerrero urging her to re-instate Pika Fejeran as chairperson of the Chamorro Land Trust Commission.

Fejeran’s term as CLTC Chairperson expired in April and the Governor appointed Lucia Lagos  to replace her.

In a July 16th letter to the Governor the group expressed “great disappointment” with the Governor’s decision to replace Fejeran.

“Through her leadership, the CLT Commission began a steady recovery after years of mishandling and repaired our faith in a government organization that was created to remedy the effects of land dispossession and colonialism,” states the letter.

Among the CLTC accomplishments cited during Fejeran’s term are:

*The CLTC prevented lands from being misused for unlawful purposes

*The CLTC also prevented 2,877 beneficiaries from having their leases voided

*The CLTC created a process to ensure the 8,000 applicants still awaiting land would not be skipped again.

“We ask you to reinstate Pika Fejeran as chairwoman of the CLT Commission,” concludes the letter “given the critical juncture it faces now and to continue the positive reform of the CLT for the prosperity of our people and island.”