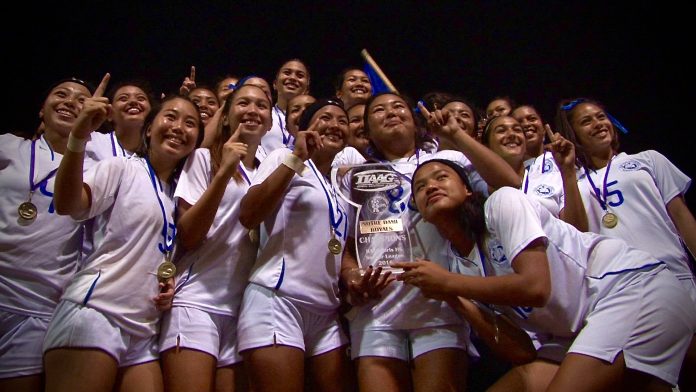 HARMON –  IIAAG Championship Saturday Night for Girls’ Soccer. It all went down at GFA’s National Training Center in Harmon. Kicking things off the 3rd place consolation game between the GW Lady Geckos and The Okkodo High Bulldogs. G-Dub, strike early in the 1st half off the foot of Sophomore and league MVP SkylaarBlu John, who gets not one but 2 goals in the game. Her teammate, Senior Jo’ani Gogue, added one. Okkodo High’a Jestyne Sablan notes the lone Bulldog score and that’s how it ends. GW take 3rd with a 3-1 win over Okkodo.

In the Championship game ND taking on Southern High. Lady Royal Destiny Castro scored 3 goals for ND, Lady Dolphin Colleen Naden scored 3 for Southern. Minutes timing away only one goal needed to take the title, and who else but Mames Blas, who scored the go ahed goal in the final minute of regulation to put her team on top and give them the 2016 IIAAG Girls Soccer Title. Royals out swim the Dolphins 4-3, the final.