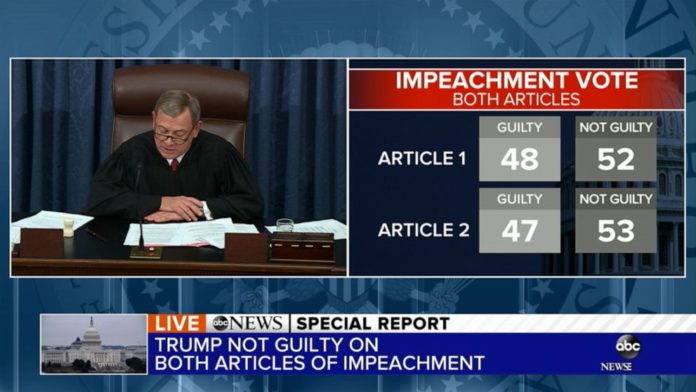 ABC News – The months-long impeachment and Senate trial of President Donald Trump came to an anticlimactic end Wednesday afternoon with acquittal on both articles.

Trump is only the third president in U.S. history to face an impeachment trial. But largely because Republicans have a 53-47 advantage in the Senate, his fate has been mostly a foregone conclusion since even before the proceedings began.

But there was drama on the Senate floor Wednesday when each senator’s name was called, and standing at their desks, they pronounced Trump “guilty” or “not guilty” as required by Senate rules on each of the two articles alleging “abuse of power” and “obstruction of Congress.”

On Article 1, ‘Abuse of Power’, 48 senators cast guilty votes, 52 said the president was not guilty.

In a dramatic moment, Utah Republican Sen. Mitt Romney announced he would vote to convict Trump, the first to break ranks with his party and the first senator ever to say he would find a president of his own party guilty.

Afterwards, Senate Majority Leader McConnell spoke to reporters saying – “I’m pretty sure (House Speaker Nancy Pelosi) did not want to do this. But the fact that she was pulled into this direction, against what appeared to be political instincts a year ago, underscores that this is a purely political exercise,” he said.

Senate Minority Leader, democratic Chuck Schumer of New York said “now that our Republican colleagues have rejected a fair trial — the truth — there’s a giant asterisk right next to the President’s acquittal,” he said “and it means that his acquittal is virtually valueless.”