Camp Stnoe, Afghanistan – It started with a handful of Guam Army National Guardsmen going about their Operation Enduring Freedom duties in this dry, remote, western area of Afghanistan, and ended with them discovering a part of home.

Something higher than a military order drew these Delta Company, 1st Battalion, 294th Infantry Regiment Guardsmen to this area. They strongly believe that.

Sgt. Randy S.N. Reyes, right, and Spc. Crystal A. Stewart, members of Delta Company, 1st Battalion, 294th Infantry Regiment, Guam Army National Guard, prepare to unveil a new sign honoring Navy Petty Officer 2 Anthony Carbullido at Camp Stone’s troop medical clinic (TMC) in Herat Province, Afghanistan. Carbullido died 2008 and the clinic was named after him. No one from the Guam Guard knew of this until they stumbled upon it shortly after arriving at Camp Stone in May. (U.S. Army National Guard photo/Released)

Officially, he had no connection to the Guam Army National Guard. He enlisted into the Navy shortly after graduating from Guam’s Southern High School in 2000. His Navy career took him to places like San Diego Illinois and even Afghanistan earlier with the U.S. Marines. Soldiers in the unit here were not aware of his death. He died less than a month after two Guam Guardsmen were killed in a different part of Afghanistan that year.

“He was in the Navy, but that didn’t matter to us. He’s still a Guam boy, a part of home,” said Sgt. 1st Class Dan Pocaigue. “And that’s what surprises all of us. Why did we have to come so far away to learn of Petty Officer Carbullido? Why out here?”

Guam Guardsmen arrived at Camp Stone in early May. While setting up in the compound, several Guam Soldiers noticed a small “Carbullido Troop Medical Clinic” sign outside the TMC. Word soon spread throughout the company, and a few were assigned to research who was “Carbullido.” To everyone’s surprise, he was a local boy.

“’Carbullido’ is a common name on Guam,” said Staff Sgt. Peter San Nicolas, Bravo administrative NCOIC and rededication ceremony organizer. “We checked the medics and nobody there had any history of the TMC. There was no picture of Carbullido, just a sign. Once we knew he was from Guam, we took it upon ourselves to do something better for him.”

Delta Soldiers got together and created a plan to improve the memorial. They organized the rededication ceremony. Soldiers chipped in funds to buy materials, scrounged for other needed items, and found Soldiers with skills to contribute to the effort. Spc. Crystal A. Stewart, administrative assistant, was in charge of painting the 3-by-3-foot sign that currently hangs at the entry.

“We designed something to represent him, his career in the Navy and his culture,” San Nicolas explained.

The Camp Stone Troop Medical Center is now graced with a large blue emblem with red borders, symbolizing the Guam flag. A sling stone-shaped icon represents Guam’s official seal. An anchor with the dates 1982-2008 honors Carbullido’s time on earth and his Navy profession. The anchor is entwined with snakes, forming a caduceus, the popular symbol of medicine and the medical corps, representing Carbullido’s military field. 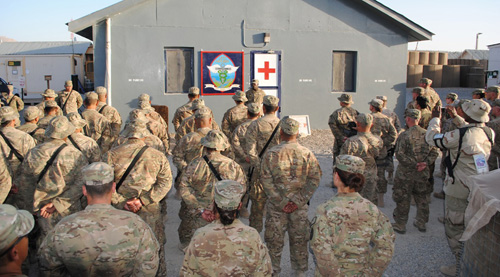 Col. Keith A. Detwiler, then RC-West commander, was deeply touched by this story that “he gave his full support,” Pocaigue explained.

“He was really honored and intrigued with us doing this,” added San Nicolas. “He watched us do this every step of the way.”

Rep. Madeleine Z. Bordallo, (D)-Guam, acknowledged Carbullido’s life in the Congressional Record Sept. 8, 2008. She states, “Carbullido died in the service of our nation and we honor his patriotism and his dedication. He is a hero who made the ultimate sacrifice for our freedom.”

First sergeant John C. Carbullido, Foxtrot Company first sergeant stationed at Kandahar Airfield, about 250 miles southeast of Camp Stone, was one of the first person’s contacted by Delta. He confirmed Anthony was his first cousin and both are from Agat, Guam. The first sergeant was the designated escort of Sgt. Brian S. Leon Guerrero, one of the two 2008 casualties. John Carbullido was en route to Guam when Anthony died.

“When I first heard of this, it ripped me apart,” the first sergeant said. “Just knowing that he was still young, that he still had a full life ahead of him, and that he had a family that will grieve for the rest of their lives was hard to understand.”

Missions at Kandahar prevented the first sergeant from attending the rededication ceremony. But he expressed his heartfelt thanks to fellow Soldiers from Delta for their thoughtfulness.

“On behalf of Tony Boy’s family, I appreciate the time and effort Delta Soldiers took to honor him and to rededicate his memorial,” Carbullido said.

Pocaigue wrote and performed a special song during the ceremony. Entitled, “So Far Away,” it described Delta’s surprise to find a memorial of a Guam brother in a distant land.

“Alone left a hero’s name, hanging on a battle cross peacefully,” Pocaigue sang. “In memory of a hero’s name for all he’s done for our freedom.”

Ironically, a framed photo of Carbullido was found later. It was buried on a shelf, between documents, at Delta’s operations center. Today it is proudly displayed on a table and is the first object visible as you enter the building. It’s another sign of Delta’s commitment to honor a fallen island comrade.

“So far away, why do we have to meet this way?” Pocaigue continued. “And for the days that they had prayed longing for his life, it won’t end this way.”