CAMP STONE, Afghanistan — Just before sundown, a handful of Guam Army National Guardsmen are prepping for a 12-hour mission. It will soon be dark, and in most cases, personnel stationed here will be asleep shortly.

But not these Soldiers from Guam’s Alpha and Foxtrot Companies, currently attached to Delta Company, 1st Battalion, 294th Infantry Regiment. This is when they commence a specific mission; one not anticipated when Task Force Guam mobilized for Operation Enduring Freedom February 2013.

About a half-dozen Guam Guardsmen serve as Camp Stone’s eyes of the night. From a control room, they track entry control points (ECPs) as well as areas beyond the outer gates. It’s in this room where they become part of the first line of defense for military and civilians housed within the compound.

“We keep track of everything that goes on in our sector,” said Sgt. Markus N. Manabat, squad leader. “Our main mission is to keep everything safe for everyone here. We work with a lot of the civilian security, but we keep eyes on areas they’re at and where they are not.”

This is just at night. During daylight, Guam Guardsmen are physically at ECPs, where vehicles and people enter Camp Stone. Most of the time they’re in towers, but they’ll get several calls to conduct searches or to simply let people and vehicles through.

Manning ECPs is a role Task Force Guam earned aside from its personal security, guardian angel and security forces roles, conducted throughout Afghanistan. Close to a dozen Guam Guardsmen are assigned to ECPs and base defense. Each Soldier completed extra training needed to conduct this mission, Manabat explained. 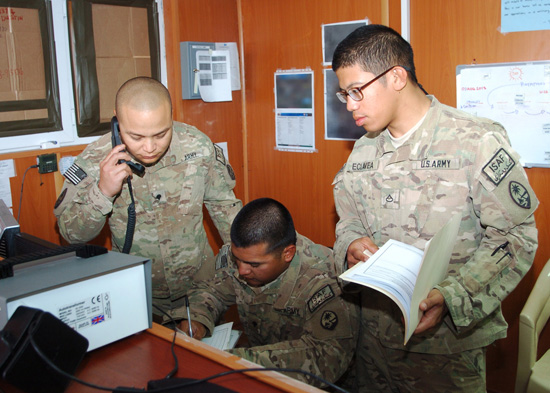 “When you have to search a vehicle, there’s a certain way to do it, and there are steps you have to follow before you get to the vehicle,” said Manabat. “We had to learn how to run perimeter cameras, how to use the system to view the entire compound. There are other things we had to learn to do this job.”

There’s a process each Soldier follows in the event of an attack or insurgent action. What helps, they said, is that a Quick Response Force (QRF) is nearby, and that group is usually comprised of Guam Soldiers.

“If we can’t handle the situation, we call our brothers,” said Manabat.

Part of their night time security role is to patrol the compound. They roam the perimeter at different hours, checking Kabul Balkh Safety and Security (KBSS) guards and their immediate needs. They check if buildings are locked and secured. They assure no fences or outer structures have been tampered. Their responsibilities include turning on outer lights and making sure equipment, such as a vehicle scanner, are working and ready when needed. 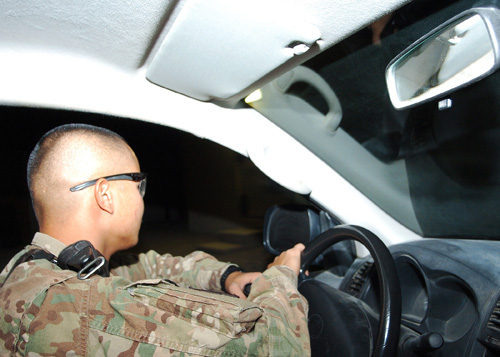 The Guam Soldiers have befriended several KBSS guards since their responsibilities interconnect, said Pfc. Ricky T. Rivera Jr., designated marksman. They are both key lines of defenses and they often operate during the same hours.

“We communicate with them as best we can since we serve the same purpose,” Rivera said. “We watch out for each other.”

The Guam group also consistently monitors other security measures around the camp, according to Manabat. “We can spot a threat in sufficient time,” he said.