Together, they are devising a plan to help Soldiers in their Guam Army National Guard battalion. The regulation – The Army Body Composition Program – provides guidance on how they’re going to get almost two dozen Soldiers to meet Army fitness standards in approximately 30 days.

“This is definitely an avenue of approach to help Soldiers meet the battalion commander’s intent,” said Carbullido, who’s Foxtrot Company, 1st Battalion, 294th Infantry Regiment houses the participants from six Guam units stationed variously in Afghanistan. “The intent is to get 100 percent (physical fitness) pass rate throughout the battalion. There are a few struggling to meet the basic standards, so they are here to do that.”

This method is a first for the Guam battalion, says Hennegan. The unit has never had 100 percent of its Soldiers successfully pass the Army physical fitness test, but it is close. This last group bridges the gap. The goal is to have the battalion attain a 100 percent success rate before it leaves Afghanistan next month.
The program started mid-November, and it is held here at Kandahar because it has adequate training facilities and warmer weather. It is now cold in Afghanistan with temperatures ranging from a high of 56 to a low of 40 degrees Fahrenheit. But southern city of Kandahar isn’t as cold as other cities, which benefits the tropical Guam Soldiers.

Carbullido and Hennegan assigned three “Ranger-qualified” Guam Guardsmen to lead the program – Staff Sgt. Raymond R. Merfalen II, Spc. Jared A. Mellon and Spc. Eric G. Gatmen. The three eat, sleep and train with the group that exercises twice a day. The main priority for the participants is to focus on the program and complete it successfully. They are also restricted from Kandahar’s amenities, such as the “Boardwalk,” which is a strip of shops including restaurants. Every Friday they’ll undergo a fitness test and, according to Army regulations, they must show signs of improvement.

“It’s designed for us to improve and we’re taking it positively,” said Sgt. Dane I. Taitano. “It’s not punishment. We’re here to get better. It’s tough as hell, but we’re motivated to do it.” 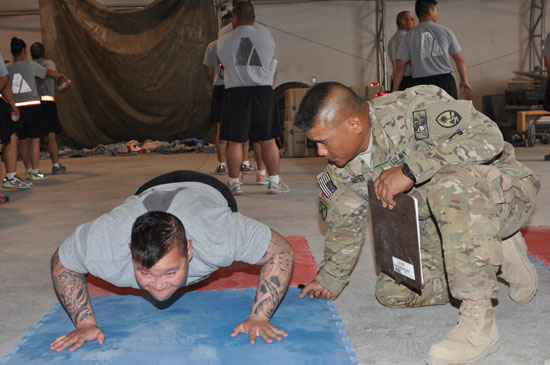 The instructors also alternate training methods. Morning exercises include running and circuit training, and afternoons consists of more running and other cardiovascular training at the Morale, Welfare and Recreation gym.

“Oh, they’re sore, but that’s the body’s way of saying Thank You for taking care of me,” Carbullido added.

Morning intensity is lighter the day of an Army physical fitness test. 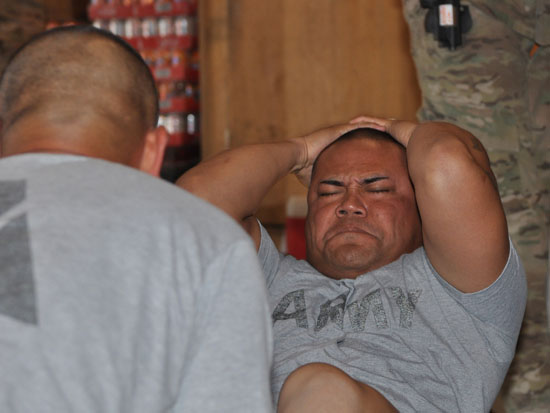 “The toughest part of this is getting them to change their behaviors, to get them to put physical training into a daily part of their lives,” according to Hennegan. “That should be the easiest thing of all. Physical fitness should be the highest priority in everyone’s life because everything revolves around you being fit.

Everything about your life is affected by how fit you are.”

The participants are briefed on the ramifications of an unfit Soldier. Those not meeting Army fitness standards can be “flagged” (suspension of favorable personnel action). A flagged Soldier is not eligible for promotion, may be prevented from attending military schools and institutional training courses, lose educational benefits, and ultimately could be discharged from military service. Guam Guardsmen currently flagged likely won’t receive deployment awards despite their hard work, says Lt. Col. Michael Tougher, Task Force Guam commander.

“Sergeant Major Hennegan and I are serious about our Soldiers meeting Army standards,” Tougher expressed. “This is an attempt to motivate and train Soldiers to meet the Army’s established fitness standards. Meeting the Army standards will benefit our Soldiers and their families for the Soldier’s entire career and beyond.” 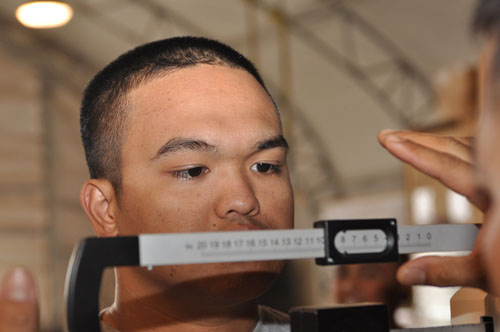 All participants must pass a record test consisting of pushups, sit ups and a two-mile run. They must also meet height and weight standards and not exceed the Army’s body fat regulation. As outlined in AR 600-9, the Soldiers must show “satisfactory progress” which consists of a 3- to 8-pound weight loss (or one percent body fat reduction) per month.

“Studies have shown that physically and mentally fit Soldiers go longer (in their careers) and are more successful than an unfit Soldier,” Carbullido explained. “This is an individual responsibility. Every Soldier is responsible for taking care of himself physically. Every Soldier is responsible for his own health. They already had a year to take care of themselves. This is their last stop.”