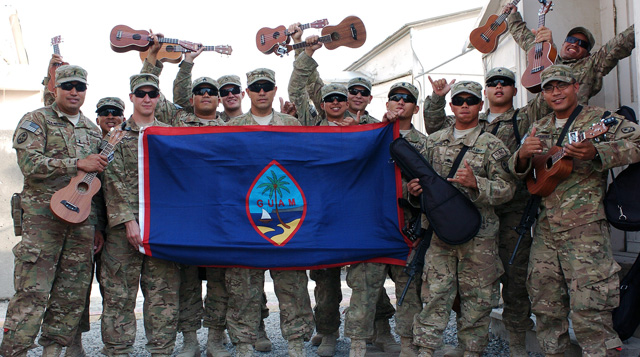 CAMP PHOENIX, Afghanistan – Soldiers from Task Force Guam were surprised to receive gifts from a Maryland-based organization that, prior to this, had no association with the Pacific Island and its approximately 600 Guam Army National Guardsmen supporting Operation Enduring Freedom.

“Music’s part of our culture,” said Sgt. 1st Class Ryan M. Castro, Echo Company platoon sergeant. “These ukes are greatly appreciated. They (Chestertown Ukulele Club) could have donated them anywhere else, but they had the soldiers deployed overseas in mind. We’re honored they thought of us.”

It so happens there is a connection between the Maryland club and the Guam soldiers. 1st Lt. Matthew T. Rogers, Echo Company platoon leader, is the grandson of Chestertown-resident Holden Rogers. The elder Rogers is a member of the ukulele club and approached club organizer Jamie Hurley of his grandson’s Afghanistan mission. Via electronic mail, the lieutenant and Hurley conversed, and weeks later the ukuleles arrived.

“My grandfather talked about how he joined a ukulele club and how often they get together to play,” said Matthew Rogers, of East Hampton, Conn. “I thought this would be a good idea to lift their spirits. This will help them pass the time, to overcome the repetitiveness that comes with deployments.”

Each ukulele came with a case, tuning instrument, extra strings and a music book, the lieutenant added. They’ll be dispersed to soldiers stationed at three camps around Kabul, Afghanistan’s capital.

“If there are any left, but I don’t think there will be, they’ll go to whoever wants one outside of the company,” said Matthew Rogers, 24.

Holden Rogers is a retired Army veteran who knows about deployments, the younger Rogers added.

Ukuleles come from the guitar family and are highly popular instruments in Hawaii and Guam. Several of Guam’s 600 warriors brought ukes, but none of Task Force Guam’s multiple companies have the ukulele-to-soldier ratio that Echo Company now possesses.

“This is a very huge gesture of support from another state,” said Echo Company commander, 1st Lt. Joey San Nicolas. “We really have to thank Lt. Rogers for this. He’s just like us. He comes from good people, that’s why he’s able to blend in with us so well. He’s part of our family. He’s honorary Chamorro (Guam native.)”

This is Matthew Rogers’ first OEF deployment. He was able to link with the Guam unit through an online deployment site.

It is approximately 7,950 miles from the Pacific Island of Guam to Maryland (http://www.distancefromto.net). It’s an additional 6,900 miles from Maryland to Afghanistan.