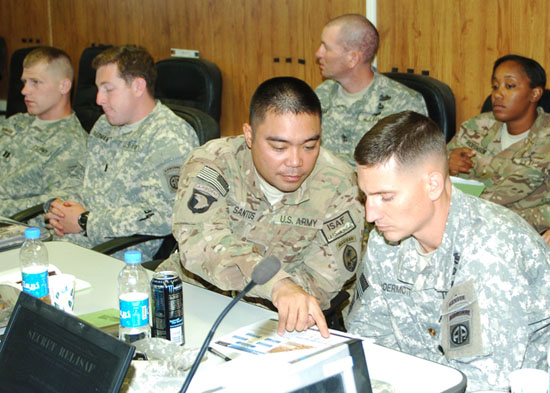 “The first thing we want to do is develop a good working relationship with Guam,” said Lt. Col. Andrew Zieseniss, 2-508th battalion commander. “We want to establish good communication to learn how Guam operates its mission. There’s no better way to do it than in person.”

The meeting is another chapter of Guam’s historic OEF mission. The Guam Guard succeeded an Alabama Army National Guard unit in April 2013. Several months from now it will be replaced by an active duty component, one of the most recognized in the U.S. Army’s history.

“Our purpose is to develop a better understanding of what our upcoming mission is,” added Zieseniss. “This is different than any of our three proceeding deployments. This mission is more complex, more dispersed than in the past. Guam presented this very, very well.”

The PDSS is a method where alternating leadership exchange critical information such as tactics, techniques and procedures. Incomers receive vital information that they can use to modify their mission requirements.

“Our goal is to make things easier for you as much as possible,” Lt. Col. Michael Tougher, Task Force Guam commander, said during a briefing. “What you see here, take with a grain of salt. We’re sharing things we had to overcome and what works for us. We’re not here to overly influence; we’re just here to share what we have done.”

This will be the 2-508th’s fourth OEF mission since 2007, Zieseniss explained.

“This one is a lot more challenging being spread out,” said Command Sgt. Maj. Brian Severino, regimental sergeant major, 4-82nd. “Previously we have performed our missions in one area, in one province. In this case, we’re spread out through the country. Guam has done an excellent job letting us know what our mission challenges are.”

Task Force Guam progresses its own redeployment plan. It’ll meet more 2-508th personnel later this year and officially hand over its OEF mission during a relief in place/transfer of authority (RIP/TOA).

Coincidentally, when a company-sized Guam Guard element supported OEF in 2008, Guam’s last Afghanistan mobilization, its replacement was also from the 82nd Airborne Division.

Military construction work to affect traffic up north for the next...