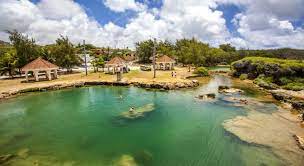 In an interview on Newstalk K57, Piti Mayor and President of the Mayor’s Council of Guam Jesse L.G. Alig interviews Inalåhan Mayor Anthony P. Chargualaf about new updates within the village.

One of the projects Mayor Chargualaf wanted to tackle was renovating the Inalåhan pool which was reported to be completed by mid-August.

Mayor Chargualaf said, “So basically, in a nutshell, the project was to basically rearmor the wall and then doing so they actually raise the wall on the edges of the pool.” He added, “So to protect the kids, what was being insisted on is that we put up more like a guard rail to protect any kids from falling in, even adults.”

On top of the pool project – a new mural and a basketball court is also in the works. The court project – according to the mayor – is something that has been delayed for too long.

Mayor Chargualaf said, “One of them, in particular, is– that’s been off the ground is, unfortunately, came to a screeching halt is the basketball court construction which is located by the Inalåhan Fire Station. Unfortunately for Inalåhan, we were supposed to have that court operating by May. ”

The Gef Pa’go Cultural Village is a nonprofit organization that will also be renovated in collaboration with GVB. Chargualaf plans to have the huts back up to produce another stream of revenue for the residents of Inalåhan, which he calls a community kitchen.

Chargualaf said, “So if we can build a community kitchen here, it’ll allow to foster entrepreneurship within the community and allow for a lot of people to sell their baked goods, their fried goods. All these things, right? So I know we have an opportunity here to stimulate an economy within our village and be able to allow for these small entrepreneurs to kind of foster and grow.”

A pilot project wherein clams will be planted at the Inalåhan Pool in collaboration with the University of Guam and the Department of Agriculture will also be happening.

Chargulaf said, “We’re going to be monitoring for about 12 months, about a year’s time, and after that, you know we expect it to be spawning– doing its natural thing then we’re going to allow the people to come in and do the harvesting. ”