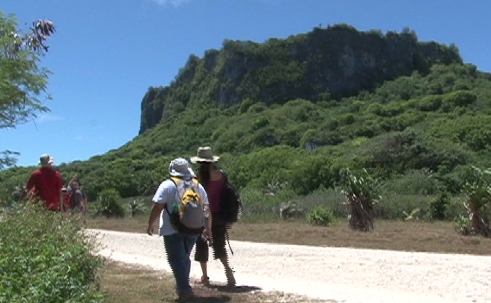 The teach-in will be this Thursday at the UOG CLASS Lecture Hall from 6 to 8 p.m. The event is free and open to the public.

Guam – Independent Guåhan will be holding its fourth teach-in this Thursday evening to raise awareness about the negative impacts of the planned firing range near Litekyan, or what’s commonly known as Ritidian.

Every month, Independent Guåhan holds a teach-in, or an enlightenment discussion about topics the group feels the Guam community should know about. This month, the organization has partnered with Prutehi Litekyan, a group dedicated to the protection of natural resources, to discuss topics relating to the history of Ritidian and the impacts of a live-fire training range.

UOG Professor of Chamorro Studies, Dr. Michael Lujan Bevacqua, shared with PNC, “The U.S. Military build-up, as part of that, there are plans to do a firing range near the Litekyan area, which is a culturally significant, sacred place, a beautiful beach shore, there’s so much history attached to that place. And if the U.S. Military’s plans go through, then it will be cut off to the public, the heritage and historic sites could be threatened, what has been done there to protect the wildlife could also be threatened. And so, this teach-in is an opportunity for people who haven’t heard about this, or maybe know a little bit about it but really want to learn a lot more about what’s going on up there, to come and hear the presentations, and hopefully join the conversation.”

Speakers from both Independent Guåhan and Protehi Litekyan will be presenting their stand on protecting the Ritidian site from further militarization. Some topics up for discussion are the area’s cultural history, the latte sites and cave paintings, the history of protest and resistance, what the military’s plans would mean for Guam and the Marianas, and legal approaches. “There are still some activities, such as legal lawsuits which could stall or stop the process,” Bevacqua said. “It is Chamorro Month, it’s Mes Chamoru, and a lot of people think that Mes Chamoru is about eating more kelaguen or saying ‘Håfa Adai’ a little bit more than usual, but you can also spend Mes Chamoru by learning about the sacred Chamoru sites, and what we can all do to protect and defend them.”

The teach-in will be on Thursday, March 16, at the UOG CLASS Lecture Hall from 6 to 8 p.m. The event is free and open to the public.