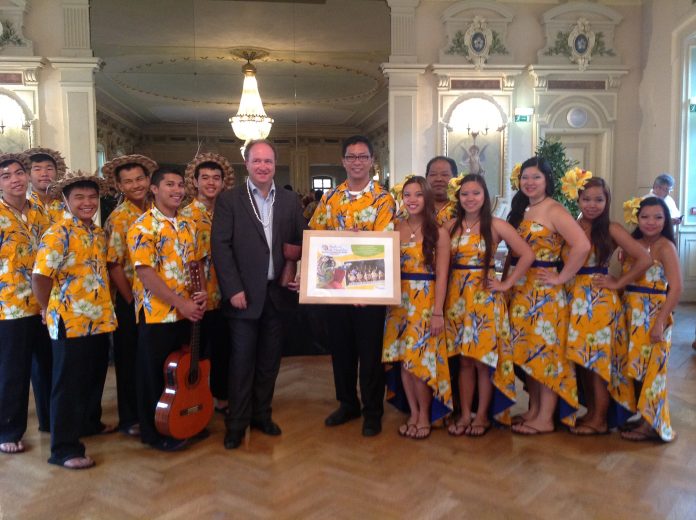 Guam- Vince Reyes, Director of the Inetnon Gefpa’go Cultural Arts Program and teacher at Inarajan Middle School was selected to serve as one of 5 judges for the 2012 World Folkdance Competition in Cheonan South Korea.
This invitation only competition, invites folkdance groups from around the world to compete. During this meeting he will also be officially selected as Chairman for Oceania Region under the Federation of International Folk Dance Festivals. (FDIAF).  “It is definitely a proud moment for Guam as no one has ever participated in such capacity” said Reyes.

Reyes was selected among hundreds of applicants and was chosen due to his the groups growing reputation internationally.

Inetnon Gefpago is an award winning performance arts program whose mission is to instill pride and awareness of Chamorro identity through performance
arts. This year alone, the group has travelled to places like Russia, San Diego, Arizona, Philippines, and just recently returned from a whirlwind tour in France and Switzerland.

Vince Reyes has been a teacher at Inarajam Middle School for 12 years, he received the Traditional Teacher of the Year from the Guam Humanities
Council (2004), and is one of the seven original Fafangue’s or traditionally certified instructors.  Reyes was just recently nominated as Master of Chamorro Dance by the Council of Arts and Humanities Agency (CAHA) and is the author of the  Middle School Traditional Arts Curriculum which was recently adopted by the Guam Education Policy Board in June. This curriculum is now the official curriculum for all public middle schools.  Aside from his world travels with his students, Vince had also been invited to speak about Chamorro Cultural Dance in places like, New Zealand, Palau, and the U.S.

“I am truly blessed and honored to represent all of Oceania and to be in the company of such wonderful and established dance directors and choreographers. Cant wait to bring back to my students and island, all that I’ve learned from this experience” said Reyes.