It appears that the Department of Corrections can’t seem to get a break.

PNC received a report that two inmates from DOC’s Mangilao compound have escaped.

Guam Police Department spokesperson Sgt. Paul Tapao said officers are on scene at the DOC compound. GPD is actively asking the community for their help in locating the following inmates: 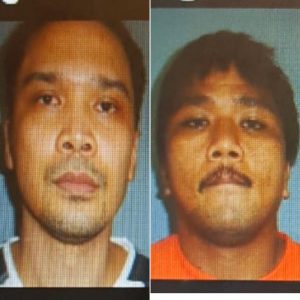 (From left to right)

The community is advised not to approach as it is unknown if the two are armed and they should be considered dangerous.

According to Tapao, the incident occurred at around 9:10 p.m., Wednesday. The two inmates reportedly escaped from Post 9.

GPD requests the community to call GPD dispatchers at 472-8911//475-8615-7. Information can also be submitted anonymously through the Guam Crime Stoppers tip line at guam.crimestoppersweb.com.

This comes less than an hour after Vice Speaker Telena Nelson led an inquisition into troubling incidents of erroneous releases, assaults on DOC officers, and other issues that have reportedly occurred at the Mangilao compound and the Hagåtña Detention Facility.