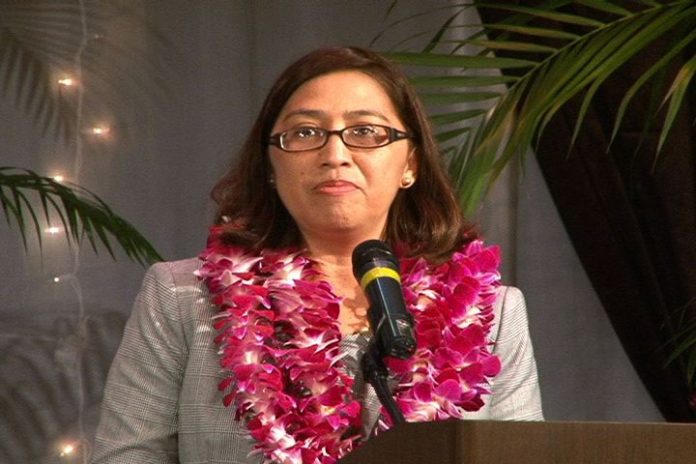 The grant will fund infrastructure improvements to GMH and several of Guam’s public schools. It will also allow GPD to replace their outdated communications system.

Guam – The Department of the Interior will be giving Guam nearly $6 million dollars for GMH, DOE and GPD.

Today(Weds.) U.S. DOI Assistant Secretary for insular areas Esther Kia’aina approved the $5.7 million dollar grant. The grant will fund infrastructure improvements to GMH and several of Guam’s public schools. It will also allow GPD to replace their outdated communications system. Specifically GMH will get $3.5 million to renovate the labor and delivery unit and purchase new furniture fixtures and equipment. GPD will get $1.1 million to put in a state of the art redundant 800mhz digital narrow band encryption cable trunked radio system. GDOE will get a million dollars to address critical deferred maintenance issues throughout Guam’s public schools.

Office of the Assistant Secretary for Insular Areas

WASHINGTON, D.C. (April 12, 2016) – Today U.S. Department of the InteriorAssistant Secretary for Insular Areas Esther Kia’aina approved $5.7 million in grant funding for infrastructure improvements to the Guam Memorial Hospital, and several of Guam’s public schools , as well as to replace the Guam Police Department’s outdated communication system. The assistance is provided through the Office of Insular Affairs’ Capital Improvement Project Program.

“Through this critical infrastructure funding we are able to assist the Government of Guam with a wide variety of public health, public safety and education related projects,” said Assistant Secretary Kia’aina.  “These projects as prioritized by Governor Eddie Calvo are aligned with our mission to support and improve the quality of life for the people of Guam.”

Capital Improvement Project (CIP) grants to be awarded this week are as follow:

Guam Memorial Hospital Authority (GMHA) – $3,500,000 to renovate the hospital’s Labor and Delivery Unit and to purchase new furniture, fixtures and equipment in order to upgrade the services provided by GMHA to the people of Guam.

Guam Police Department (GPD) – $1,170,000 for the initial phase to replace the current Public Safety Communications System with a “state of the art”, redundant, 800MHz, digital, narrowband, encryption cable, trunked radio system.  The current system is 24-plus years old and is no longer manufactured.  The Public Safety Communications System is the only radio communication system operated by the Government of Guam which is used by the Guam Police Department to dispatch public safety officers, including marine rescue and SWAT units, and the Guam Fire Department for firefighting, hazmat and emergency rescue services.  It is also used by other government agencies that require radio communications, such as Guam International Airport Authority, Guam National Guard, and Guam Homeland Security.

Guam Department of Education (DOE) – $1,000,000 for year two of the four-year Insular Area Assessment of Buildings and Classrooms (Insular ABC’s) health and safety initiative to address critical deferred maintenance issues throughout Guam’s public schools.  The Insular ABC’s is a partnership between the Office of Insular Affairs and the Army Corps of Engineers which assessed every public school building in Guam, created an analysis of general school conditions, and aggregated a detailed database of deferred maintenance needs and their associated costs.

The Secretary of the Interior is responsible for coordinating federal policy with respect to the territories of the U.S. Virgin Islands, American Samoa, Guam, and the Commonwealth of the Northern Mariana Islands, and administering and overseeing U.S. federal assistance provided to the freely associated states of the Federated States of Micronesia, the Republic of the Marshall Islands, and the Republic of Palau under the Compacts of Free Association. On behalf of the Secretary, the Assistant Secretary for Insular Areas executes these responsibilities through the Office of Insular Affairs whose mission is to foster economic opportunities, promote government efficiency, and improve the quality of life for the people of the insular areas.