Guam – A drug investigation and a separate probe into the theft of a handgun owned by a Guam Customs Officer has led to the arrest of 2 men who are now accused of selling “ice”,  burglary and other charges.

READ the Magistrate report HERE [scroll down, last one]

According to the Magistrate’s report the charges against the 2 grew out of “intersecting investigations” involving the March 7th burglary of  the home of Customs Officer William Cruz.  He “immediately noticed that his weapon was missing.” Cruz himself canvassed his neighbors and “his informal investigation lead him to suspect Pocaigue.”

Officer Cruz confronted Pocaigue, who “did not reveal any information.”  But then, a week later on March 14th, Officer Cruz’s “ex-wife, who lives in the officer’s residence, found the weapon in an outdoor sink.”

Separate to the handgun theft, the Guam Police Violent Street Crimes Task Force was conducting its own investigation involving narcotics trafficking. On March 13 an informant told Task Force officers that Pocaigue was dealing “ice” and that he worked for Cepeda.

On the same day, the Task Force conducted a controlled buy from Pocaigue and Cepeda.  “Cepeda handed the small packed [sic] to Pocaigue, who then handed it to the cooperating informant.“

The entire transaction was recorded on a digital recording device placed on the cooperating informant. Tests later determined that the substance in the small package was crystal meth.

Cepeda were then arrested. 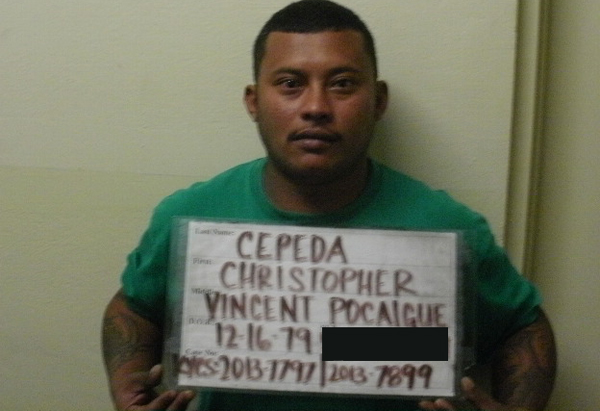 Police later interrogated Cepeda’s common law wife Mary Cruz who said “she was aware of Mr. Cepeda selling methamphetamine” and that “she suspected Pocaigue was involved in a series of residential burglaries.”

According to the magistrate’s report, “Cepeda admitted to selling methamphetamine, and employing Pocaigue in the business,” but he denied exchanging meth for stolen goods, although he “acknowledged that several items given to him by various friends’ may be stolen.”

And Cepeda agreed to give up a number of those items, including “a large flat screen television, a large air compressor and a brush cutter. Defendant also surrendered a large quantity of money recovered from a safe within the home.”

On March 20th, police caught up with Pocaigue who “admitted selling methamphetamine, but denied working with Cepeda.” And, the Magistrate reports states, Pocaigue also “admitted breaking into Officer Cruz’ home, and stealing the officer’s service weapon and ammunition.”