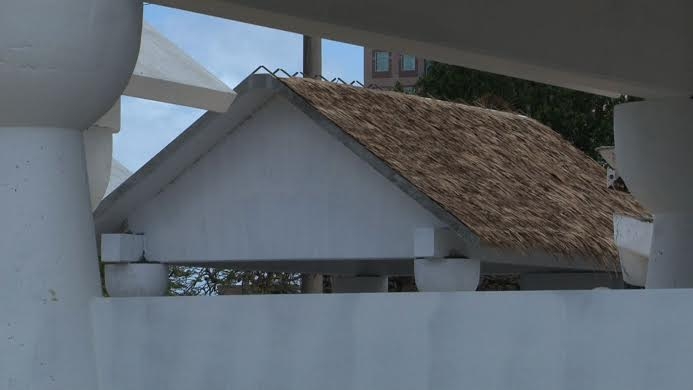 Guam Customs and Quarantine Spokeswoman Jessi Santos confirms for PNC that on March 1st customs agents found that a container filled with cut nipa leaves from the Philippines had “active blue flies”.

Guam – In related news a shipment of nipa leaves that are being used to cover the cement huts for FESTPAC was found to have an invasive fly.

Guam Customs and Quarantine Spokeswoman Jessi Santos confirms for PNC that on March 1st customs agents found that a container filled with cut nipa leaves from the Philippines had “active blue flies”. The container arrived with a certificate indicating it was fumigated before leaving the P.I. but after finding the flies customs agents had to fumigate it twice. The specimen was sent to a USDA lab which identified it as physiphora clausa. The USDA considers this a “non-actionable pest” as they are not known to cause any economic damage however local authorities deemed that fumigation was necessary in case other pests were hiding amongst the leaves. On March 16th the container was treated with Vikane at the request of the consignee who paid for the treatment. The Vikane was ineffective and it had to be treated with methly bromide on March 17th. After this treatment the container passed inspection and was released to the consignee.

READ THE FULL RELEASE BELOW:

On March 1, 2016 CQA inspected a container loaded with 5,140 kg of cut nipa leaves arriving from the Philippines. These leaves were imported as construction materials for FESTPAC.

The container arrived with a phytosanitary certificate indicating it was fumigated before leaving the Philippines, however, upon opening the container officers observed active blue flies.

The officers immediately disabled the specimen, placed it into a vial and resealed the container to prevent any from escaping. The specimen was given to UOG entomologist Dr. Aubrey Moore who currently identifies intercepted insect pests for Guam. When Dr. Moore could not identify the specimen to species, the specimen was shipped to the USDA Systematic Entomology Laboratory in Washington D.C. as is protocol for incoming foreign shipments.

On March 7, the specimen was identified as Physiphora clausa in the family Ulidiidae. USDA considers this species to be a “non-actionable pest” as they are not known to do any economic damage.

Although USDA deems these flies “non-actionable”, local authorities determined treatment was necessary prior to release as the risk of other pests hiding amongst the nipa leaves was probable.

Mr. Patrick Artero, Acting Chief of the Guam Department of Agriculture’s Biosecurity Division, who makes the final deposition, gave the consignee the option to export back to the port of origin, destroy, or treat. In this case, the consignee opted to treat. Note: The consignee absorbs this cost.

The container received treatment of two separate types of fumigants.

The consignee asked to fumigate with a product called Vikane which isn’t as effective or expensive as the other option. Treatment of Vikane was applied on March 16, 2016, however, it was ineffective and the container did not pass re-inspection. The container was resealed and reported to Mr. Artero who recommended fumigating with a product called methyl bromide, applied on March 17, 2016. This line of treatment subsequently eradicated the specimen and met the requirements to pass re-inspection .

On March 17 the container was released to the consignee, after CQA officers conducted a third inspection to ensure it was free of any live pests or invasive species which could negatively impact Guam’s agriculture or natural resources.