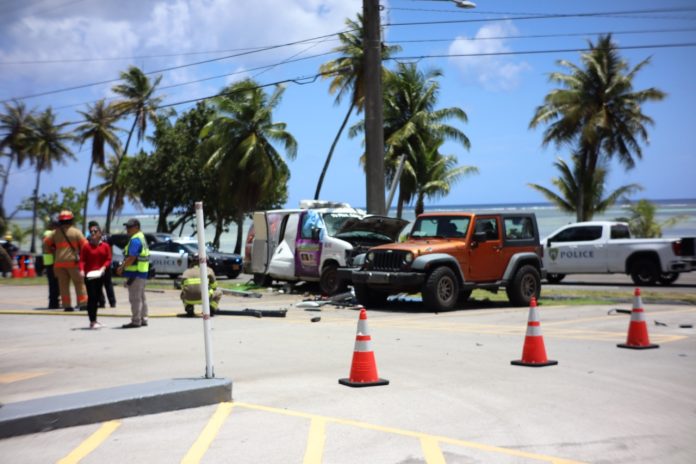 PNC was on the scene in the village of Hagatna, where a fatal car crash accident took place.

PNC’s Don Sulat has more on this story

Officer Berlyn Savella, GPD PIO stated, “Officers from the Tamuning precinct responded to a crash at around 11:10 am. Where it was identified, based on the preliminary investigation we have an auto-ran off the roadway, 2 autos, 1 parked unattended, unfortunately with a fatal crash.”

According to Savella, the victim was transported to the Guam Memorial Hospital, but could not be properly identified at this time.

Earlier today, the Guam Fire Department reported that GFD units were on the scene; however, due to the nature and severity of the injuries sustained in the crash, no health care services were performed on the victim.

A power line did go down, as the vehicle crashed into a power pole, which prompted the Guam Power Authority’s arrival.

GFD’s Medic 1 and Engine 10 along with Rescue Units did arrive to provide assistance along with medical attention.

The operator of the vehicle, according to Officer Savella, was heading up north before being run off the roadway and colliding with the aforementioned power pole. The pole collision resulted in car debris damaging the parked car.

The investigation is ongoing.