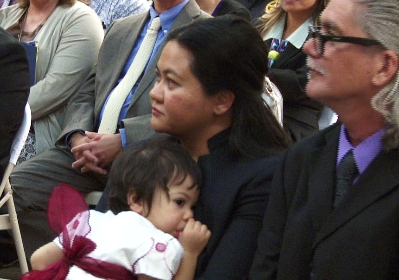 Elyze McDonald Iriarte has been sworn-in as the 7th Superior Court Judge. The investiture ceremony was held at 4 p.m. today at the Superior Court atrium.

Guam – The 33rd Guam Legislature confirmed Iriarte’s appointment as a judge on November 22.

Iriarte was appointed by Governor Eddie Baza Calvo to fill the vacancy on the Superior Court bench left by the resignation of Judge James L. Canto II. That spot was temporarily covered by Family Court Referee Judge Linda Ingles.

According to Joshua Tenorio, Administrator of the Courts, “We’re very pleased that Judge Elyze McDonald Iriarte will be taking her oath of office. She’ll be joining the other six judges to complete the current Superior Court of Guam, which is a bench that includes seven judges.” Tenorio added, “Earlier this year during the State of the Judiciary Address, Chief Justice Torres certified the need for an eighth judge… and the Court continues to look forward to the other branches approving for an eighth judge so that we can continue to improve the time disposition rates for all of the cases in front of the court.”

The investiture ceremony for Iriarte began at 4pm this afternoon at the Superior Court atrium.