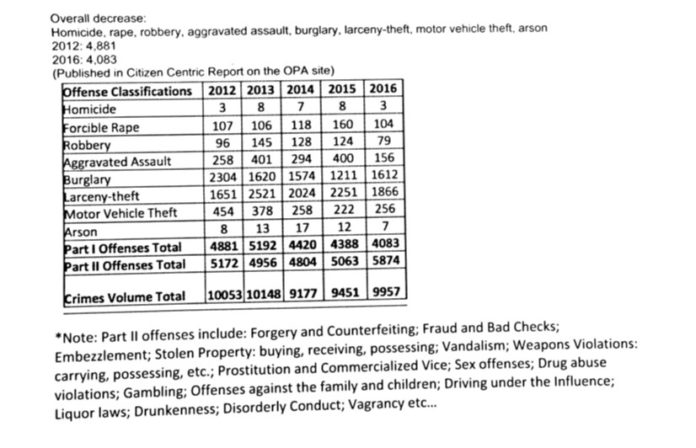 Guam – Is crime trending downward? Apparently that is the case according to the Guam Police Department based on available information.

PNC asked GPD if it would be more accurate to state there is a fluctuating trend—because as defined, a downward trend would show each successive year being less than the previous year.

“I will tell you when you analyze it from one year to the next then yes, your statement is accurate, your analogy is accurate,” Police Chief JI Cruz said.

But according to Chief Cruz, what they are discussing is a five year trend that compares the crime volume from 2012 to 2016.  In doing so, the police department says in its eyes there is an overall downward trend—even if the data also shows peaks and valleys from one year to the next.

PNC took a look at the data provided from 2012 to 2016.  The number of total crimes rose 4 out of the 5 years analyzed, with the lowest total crime volume recorded in 2014.  It’s clear that crime did not decline each successive year, so is GPD being accurate in how it speaks about trends?

“I have stated that in what we put out that there are differences and trend have dropped from one year to the next. I would agree with you that the trend does fluctuate up and down as you define,” acknowledged Cruz.

What other way is there to define a downward trend?

“Again as we take a look at this from 2012 to 2016 we are considering all the variable that affect that at that particular point,” explained the Chief.

The Chief of Police further explained the numbers from 2012, when taking into consideration 2013 through 2016 is a downward trend.

Is there a downward trend? Despite the rise in crime year-to-year GPD says yes, but acknowledges that others can come to a different conclusion.