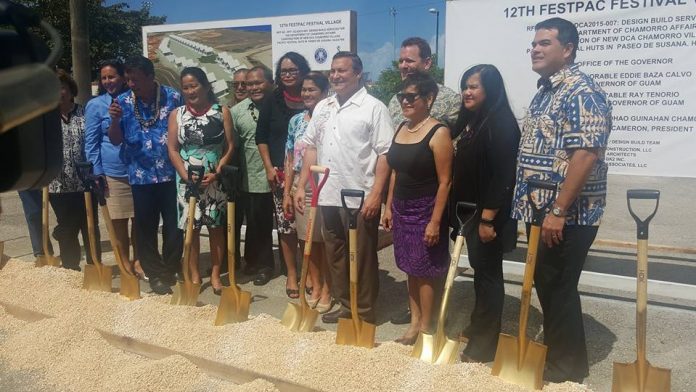 Today marks 191 days left until the largest cultural event of the region: The Festival of the Pacific Arts. And in preparation for the festival, the island’s capital of Hagatna is getting ready for a complete revamp.

Guam – This morning, a ground breaking ceremony was held for the Festival Village, a project that includes the construction of 34 huts to be used by the 27 Pacific island nations that will be participating in next year’s festivities. The cost of this project is $1.9 million dollars.

Senator Tina Muna Barnes says, “We’re not just building something new. Today’s groundbreaking ceremony is just the tip of the iceberg. Because the huts we’re getting ready to build will become part of the event that symbolizes the commitment of our generation to always nurture the gift of tradition and culture given to us by our parents.”
Like what Senator Tina Muna Barnes said, this project is just one of many improvement and beautification  projects that will take place in the heart of Hagatna, which will be the center stage for FestPac. During the ceremony, Governor Eddie Calvo spoke about what to expect in the coming months. He says, “Next week we’re going to have the breaking ground for the great seal of the Guam park, a 3D dimensional, real life representation of the Guam seal. Our museum will be completed by December and some of the other work internally another month or two. Our fishing platform that will be completed and ongoing work for the Fisherman’s co-op. Renovation to the Guerrero field.”
Governor Calvo says it’s a very exciting time for the island because we’re not just preparing to showcase our culture and history at the event, it’s also an opportunity for us to learn from our Pacific neighbors. He explains, “FestPac, it’s an opportunity for us the island and people of Guam, that have a 4000 year old culture and history. It’s time for us to display it. Display it to the Pacific island neighbors and display it to the world. It’s an opportunity for us also to learn about our neighbors those who shared this paradise called the Pacific. It’s time for us to come together as one people of the pacific.”
The Governor says FestPac will be the largest event Guam has hosted in some time, with the island expected to welcome over 2500 participants.