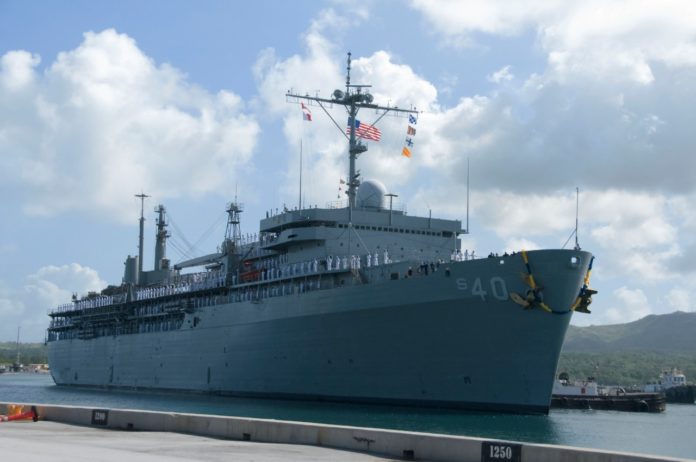 Social isolation orders around the world have taken different tolls on people.

You hear of divorces rising, mental health struggles, improving culinary skills, and even some positive quality-time stories among families.

One military spouse on Guam shared her story with PNC News about the burden of living without her husband, who’s being sequestered on the U.S.S. Frank Cable.

She’s now working her full-time job, caring for their two children on her own, supporting the kids’ online schooling, all with no family support here on Guam. She says there’s nowhere to turn for added help, since social-distancing has isolated her from anyone who would normally support her, like neighbors or caregivers.

“So literally, the only person who can help me, is my husband”…who has been quarantined just a few miles away in the Apra Harbor, for at least 4 weeks.

“I can literally walk out my front door and see his ship,” said the spouse, who asked to remain anonymous.

“I know he wants to get off [the ship] and come help me…support me in balancing the children, their schooling, my full-time job…and he just can’t.”

She’s been working for a healthcare company based out of Virginia for 10 years.

Before the sequestration on the U.S.S. Frank Cable began, her husband would go to work on the ship for a regular ‘9-5’ shift, then come home. Her kids were in daycare and school, and this spouse would work from home during the day.

But with the Navy’s request to hold crew members on the submarine tender coming suddenly, there was just no way for them to plan ahead for support.

“We had less than 48 hours notice to make arrangements and get his supplies that he would need on the ship. And they said to prepare for an indefinite amount of time. They couldn’t give him an answer as far as when they’d be home,” she said.

They weren’t given a reason, according to the spouse, for the sequester order; they just assumed it was related to COVID-19.

The spouse still doesn’t know when her husband will be let out of the now month-long quarantine.

“So in addition to my own personal job of working 40-to-50 hours a week for a home-healthcare company, I’m now a full-time 2nd Grade teacher and also providing care for my very active 4-year-old,” the spouse said.

She says under regular circumstances, before the COVID-crisis, the Navy and different military commands would have a lot of support networks within their community, even “give parents a break night” options.

“But with all the social distancing everything was stripped away. We have no social support, we’re not allowed to have baby-sitters come to our home, daycare facilities are all closed, the school’s closed, and the only people allowed in your home are your family, and my family is 8,000 miles away,” the spouse said.

She said she understands the Navy’s mission will always come first, and they knew what they signed up for.

The spouse also knows that COVID-19 is unprecedented, and it’s a matter of “learning as we go.”

But with the USS Frank Cable sitting in Apra Harbor, and families on Guam separated by just miles, she wishes the Navy would have thought out this plan a little more thoroughly.

“It’s not about being separated from my husband, I’m used to deployments…we’ve been separated for two years before,” said the spouse. “It’s that there’s nowhere for me to turn for support. My family could help me, neighbors could help me…but that’s just not possible now.”

“We, too, are the support system for those sailors and I wish the Navy would have thought about the toll on families to quarantine suddenly on the Cable.”

The spouse says in regular deployment circumstances, they were given enough notice to plan ahead, for child care or family members flying out to Guam to support.

But this is not a deployment; her husband’s ship called the crew back to be sequestered in Apra Harbor at the end of March.

“It’s exhausting and overwhelming. And that’s when you start reaching out because it’s not sustainable to live like this.”

When asked what Navy officials say when she reaches out, “I get a lot of ‘thoughts and prayers are with you’ and, ‘that sounds really hard’ and then they send me mental health support options.”

She says she’s tried talking to a therapist to work through the mental health toll.

“I don’t need a magic pill or another FaceTime session with somebody that’s not here. I need someone physically here to help me with the day-to-day tasks.”

That person was typically her husband and sometimes neighbors.

“It’s just an extremely isolating feeling to have people around you, that want to help, and yet you can’t take them up on it,” she said.

“I leave my house and see my neighbor in front of me who’s offered to help, but I can’t take her up on it [because of social-distancing]. I look over to my side and see my husband’s ship…he too wants to help, but is quarantined.”

“Everyone is just out of reach,” she said.

The spouse says communication from Navy officials has not been robust. In fact, she read a letter written to the families of the Frank Cable sailors through a PNC story, which she says was never sent to her.

She said she’s spoken to other Frank Cable spouses who are feeling similarly frustrated and in the dark.

“I know I’m not alone. This is a worldwide struggle and I feel for anyone who’s single parenting right now. Trying to juggle work, children, school…”

In a statement sent to PNC News, Navy officials say their “number one priority is the safety and welfare of U.S.S. Frank Cable sailors, civilian mariners, and their families.”

According to CDR Cindy Fields, the spokesperson for Submarine Force, U.S.
Pacific Fleet, “the direction for the crew to sequester aboard ship was to ensure their continued health and to maintain operational readiness.”

The statement explained that the Cable is conducting, “a planned shipboard maintenance period while continuing to support the submarine force.”

CDR Fields said, “we are committed to making the best-informed decisions to protect the health and safety of our Sailors, civilian mariners, and their families.”

According to Joint Region Marianas, the U.S.S. Frank Cable (AS 40) has more than 1,000 U.S. Navy Sailors and civilian mariners serving in her crew.

None of the crew of U.S.S. Frank Cable has tested positive for COVID-19.