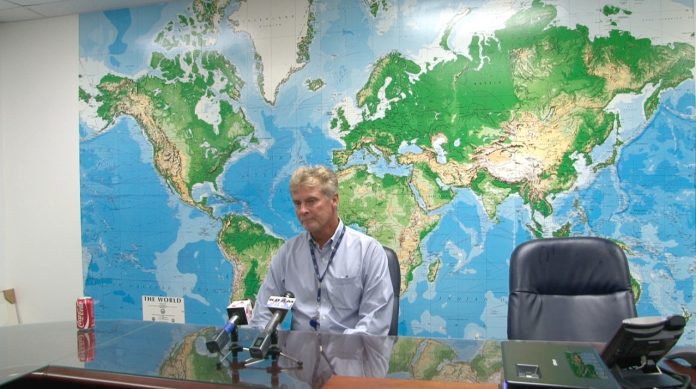 IT&E’s main cable was damaged and connectivity in Saipan is nonexistent. Connectivity for Guam and CNMI is severely limited.

Guam – If your phone provider is IT&E, you might want to read the latest on a massive interruption of services due to a damaged fiber cable.

IT&E’s main fiber cable between Guam and the CMNI was damaged early this morning. The downed cable has caused a complete disruption of services in Saipan and has limited connectivity in Guam. PTI, which is IT&E’s parent company, held a press conference to address the downed cable. According to a press release, ITE says the damage is related to tropical storm Chan-Hom, which passed through the Rota channel over the weekend. PNC asked Oehlerking how a storm that passed through the Rota channel was able to knock out connectivity in Guam and Saipan.

“Well I mean obviously its got a hundred mile width right and tremendously violent seas and depending on tides and tidal activities, wind direction again its hard to exactly pinpoint what would break a large boulder free from a ledge. Again that’s why we said that ‘appears’ to be the case,” said Oehlerking

Oehlerking says that once a repair boat arrives they will be able to see exactly what caused the damage. As for their microwave dish, which is supposed to serve as a backup in the event of a downed cable, Oehlerking says that was damaged too during Typhoon Dolphin which pummeled through the Marianas in May.

“We’ve dispatched a team, via chartered helicopter to Rota, we also had a team that came out from Saipan and Tinian. The links for that is from Guam to Rota to Tinian to Saipan and there had been some damage from the previous Typhoon and its performance was not entirely where we wanted it so we dispatched these teams to use this as a portion of backup for the fiber optic cable cut,” said Oehlerking

Oehlerking said that the dish should be up and running in within 24-48 hours. He also gave a tentative timetable as to when people should expect full connectivity.

“Right now our first priority is working on getting some level of basic access and communications back with Saipan. After that were going to have to assess the overall timeframes and damage and the undersea cable repairs require…we’ve isolated the break in the cable between Tinian and Saipan,” said Oehlerking. “We’ve contacted undersea cable repair companies and we’ve got to look at scheduling for boat availability, there’s also somewhat weather dependent on their ability to get out here and work on the cable. I’d say within the next 2-3 days we should have a better timeline of a longer term solution for fixing the cable.”

You can read the full press release on pacificnewcenter.com