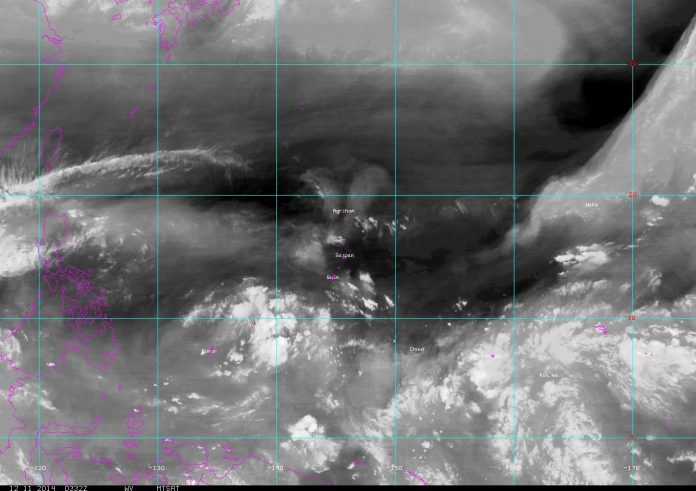 (Photo Courtesy of NWS) Shower bands are approaching Guam and Rota from the east.

Guam – The National Weather Service says that shower bands are approaching Guam and Rota from the east. Scattered showers might persist tonight, and it will likely to rain until tomorrow morning.

“GFS/ECMWF show this moisture sticking around into Friday morning before drying out,” NWS explains about the shower bands in a statement.

After shower bands disappear from the region, high pressure will kick in to keep weather dry and calm. NWS adds that relatively quiet weather patterns will be in store for the next few days. However, a tropical disturbance located in eastern Micronesia is expected to affect the Marianas early next week.

“So kept mostly cloudy wording in the forecast for Sunday night and Monday. Otherwise, a dry trade-wind pattern appears to be in store,” NWS explains.

Seas stay in the 5 to 6 feet range, going up to 6 to 8 feet early next week, but NWS says that swell will not be strong enough to cause high surf.

“Modest north swell events during the next week will maintain a moderate rip current risk along respective reefs,” NWS added.

THIS AFTERNOON…PARTLY SUNNY WITH SCATTERED SHOWERS. EAST WINDS 15 TO 20 MPH. HIGHS AROUND 89.

FRIDAY…MOSTLY CLOUDY WITH SHOWERS LIKELY IN THE MORNING…THEN MOSTLY SUNNY WITH ISOLATED SHOWERS IN THE AFTERNOON. EAST WINDS 10 TO 15 MPH. HIGHS AROUND 89.