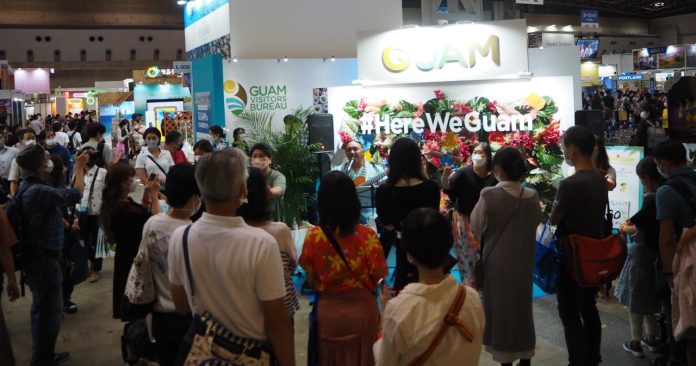 Have your passports ready as Japan, the land of the Rising Sun will reopen its borders soon. In a sit-down interview with PNC, GVB gave insight on how the country’s full reopening can benefit Guam, as well as details on GVB’s recent trip to the Tourism EXPO in Japan.

Nadine Leon Guerrero–Director of global marketing for the Guam Visitors Bureau said, “We’re hoping for a positive effect on it. The sentiment in Japan based upon our interviews with the consumers is that because they had arrival caps that their borders really weren’t fully open. Now that they’ve removed that, and people can come and go as they can into the country, we’re hoping that it’ll inspire the consumers within Japan to travel to Guam.”

Nadine Leon Guerrero says that are some challenges such as the yen rate, however; the Tourism EXPO held in Tokyo, Japan is benefiting the island when travelers do arrive.

Leon Guerrero added, “We were approached by several of our travel trade partners, as well as the media in Japan that are excited to come over, willing to visit our island, provide some great and much-needed coverage to help us promote our destination.”

As for GVB’s recent trip to the land of the rising sun, according to Regina Nedlic–Japan Marketing Manager, during the Tourism EXPO many travelers expressed that they are missing the island paradise of Guam and are excited to come back.

Nedlic said, “That in-person experience of being out there and having to see so many consumers that have actually really missed Guam, you know it was for them, they were really happy to see that Guam was out there and for us to be ready to share what we have to offer.”

According to Nedlic, the Tourism EXPO was a four-day event consisting of networking with agents and industry partners, promoting group travel, showcasing the CHamorru culture, and reminding interested travelers that the US destination is just 3 1/2 hours away.

Japan is set to fully open its borders on October 11.

To learn more, visit the GVB website at guamvisitorsbureau.com