Guam – No. 2 Takuto Niki of Japan became the lone player in Guam Futures history to win both the singles and doubles championship trophies in the same tournament after upsetting No. 1 Jeevan Nedunchezhiyan 6-7(6), 6-2, 7-5 in the singles final of the 2014 Delta Guam Futures presented by Docomo Pacific and Hilton Guam Resort & Spa at the Hilton tennis courts.

“I’m very happy right now – this is my first title overseas, and it’s very special to me because I was able to win both the singles and doubles titles,” Niki said with the assistance of a translator after his match. “The tournament in Guam is always a good environment with the hard work of all the officials, volunteers, ball kids, and also with the many sponsors. Every year I come to play here, everyone is always so welcoming and very supportive. There was a good crowd today supporting us even in the hot weather – it’s a rare experience for me.”

[The finalists of the 2014 Delta Guam Futures presented by Docomo Pacific and Hilton Guam Resort & Spa pose for a photo with their respective trophies. No. 2 Takuto Niki upset No. 1 Jeevan Nedunchezhiyan 6-7(6), 6-2, 7-5 to win. In the photo are from left to right, Gary Au-Yeung, ITF Supervisor, Nedunchezhiyan, Niki, and Torgun Smith, tournament director.]

Both Niki and Nedunchezhiyan began the match stingy with their service games playing up to 4-all before Niki received and converted his first break opportunity to move ahead of ahead in the first set. Though serving for the set, Niki could not close the deal, showing his frustration and receiving a ball-abuse warning from chair umpire Miwa Tsujimura in the process. Niki eventually lost the first-set tiebreaker.

“When I was leading 5-4 in the first set, I was very optimistic and didn’t play as aggressively as I needed to for that game,” Niki said. “I was mentally weak and let (Nedunchezhiyan) break back. I knew that I had to be mentally stronger to win the match. Even though I was disappointed, the first-set score was so close so I still had the confidence to stay in the match and it showed in the second set.” 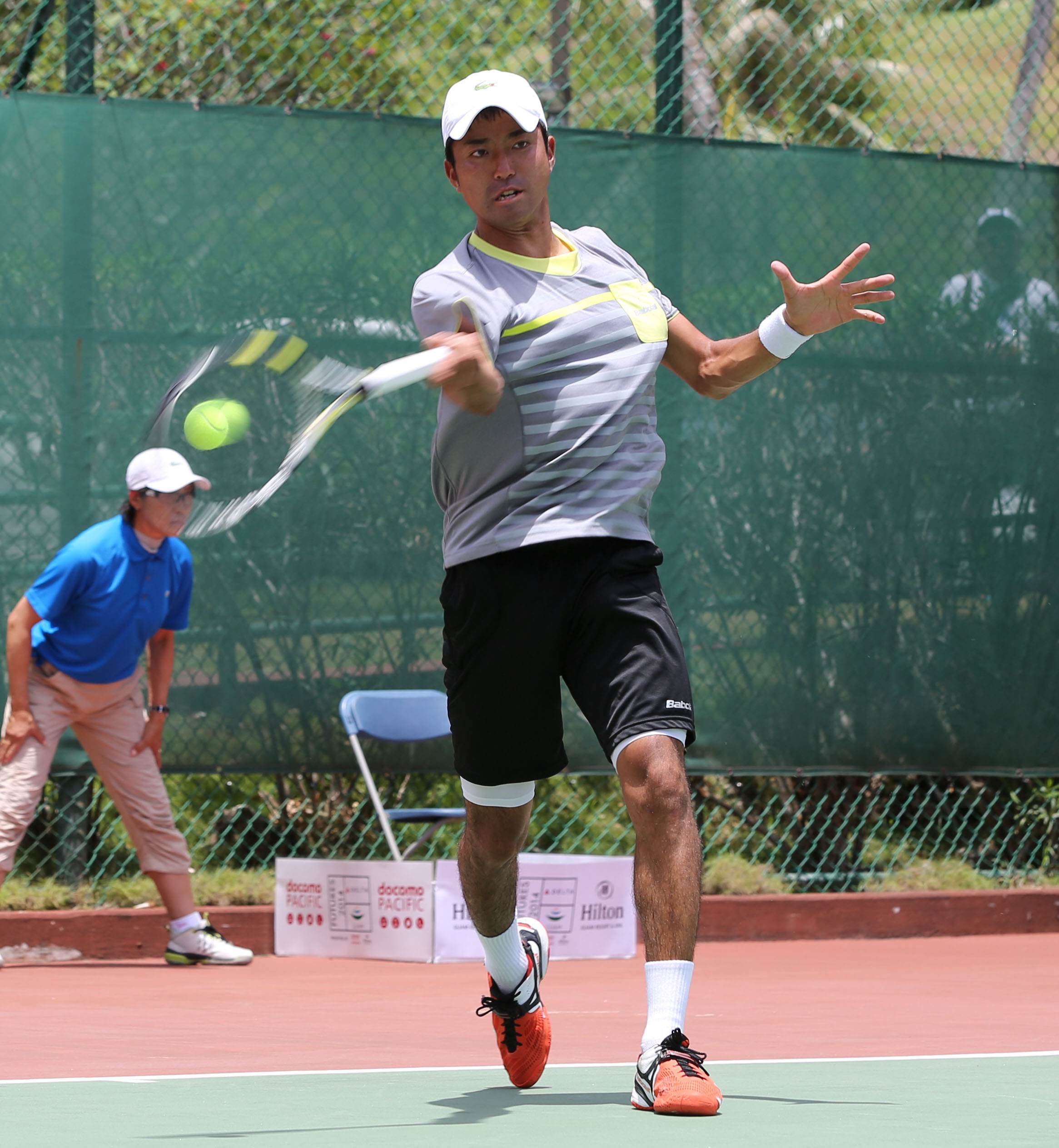 [No. 2 Takuto Niki plays a forehand return against No. 1 Jeevan Nedunchezhiyan of India in the singles championship match of the 2014 Delta Guam Futures presented by Docomo Pacific and Hilton Guam Resort & Spa at the Hilton tennis courts. Niki upset  Nedunchezhiyan 6-7(6), 6-2, 7-5 to win the title.]

The third set was a different story with the finalists breaking each other’s service games to begin the deciding set, but it was Niki who would manage to also hold serve to stay in the lead. At 3-3, Nedunchezhiyan managed to break Niki’s serve again, but couldn’t hold serve in the next game to level the set. Down 5-6, Nedunchezhiyan needed to hold serve in order to force a tiebreaker, but Niki had other plans. Already down 0-15 to start the game, Nedunchezhiyan challenged a Niki service return winner he thought was out, but instead was ruled in. The frustration only grew, with Nedunchezhiyan eventually handing Niki the title on a double fault.

“I’d like to congratulate Niki for a great week, he played well,” Nedunchezhiyan said as he addressed the spectators after receiving his runner-up trophy. “In the last year alone, I probably went to 20 different countries around the world for tournaments and in my first time here in Guam, I can say that this is definitely one of my favorite Futures tournaments. I’d like to thank all the officials and ball kids and I apologize if I was nervous and intense during the matches. I’d also like to thank (all the spectators) who stayed to watch a three-hour long match.”

[No. 1 Jeevan Nedunchezhiyan of India sends a backhand return to No. 2 Takuto Niki of Japan in the singles championship match of the 2014 Delta Guam Futures presented by Docomo Pacific and Hilton Guam Resort & Spa at the Hilton tennis courts. Niki upset Nedunchezhiyan 6-7(6), 6-2, 7-5 to win the title.]

Nedunchezhiyan will take a week off from tournaments to train in Germany, he said. Niki will be playing in four back-to-back tournaments when he returns to Japan. The Guam Futures was his tenth tournament this year and his second singles and doubles titles of the year. His first singles and doubles titles came at the Kofu International Open Tennis 2014 (Japan F3 Futures) in Kofu, Japan. By this time next year, he says he hopes to play in Roland Garros, a Grand Slam tournament in France.