Tokyo – The Guam Chamorro Dance Academy (GCDA) is a program started by the Guam Visitors Bureau in 2009. With the growing popularity of international cultural dances such as Tahitian and Hawaiian in Japan, GVB started the program to teach Japanese the art of traditional Chamorro dances.

There have been over 1,500 students since the program started and Master Frank Rabon has held classes in over six cities including Tokyo, Nagoya and Fukuoka.

[Students of the Guam Chamorro Dance Academy practice before their main performance at the JATA East Main Stage. There were over 55 students that participated in this year’s JATA.]

“The GCDA has grown exponentially over the last three years,” GVB Deputy General Manager Nathan Denight said. “We now have two Gumas in Japan and many Japanese are traveling to Guam to continue their training or participate in cultural events with our local people. It’s really touching to hear Japanese singing in Chamorro and learning our history and traditions through dance. Our culture and people is what makes Guam unique and the Bureau will continue to work hard to support and promote kotturan Chamorro.” 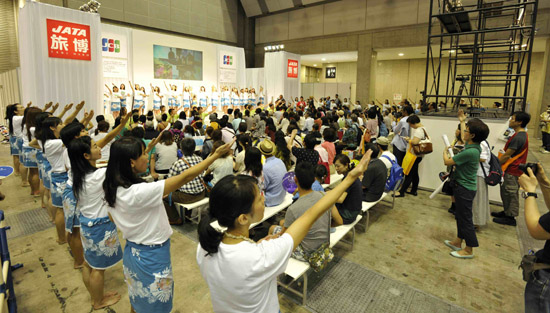 [Students of the Guam Chamorro Dance Academy perform traditional Chamorro dances at the JATA East Main Stage to close out day 3 of the JATA Tabihaku Travel Showcase on Sunday, September 15, 2013.]

The GCDA has been held at JATA since the inception of the program. This year, over 55 students from all over Japan has come to Tokyo to dance at the Guam Booth and the JATA Main Stage. Additionally, these students fly from Japan to Guam to dance at events such as the Dinaña Minagof and the Guam Micronesian Island Fair. This past GMIF, over 30 students came from Japan to showcase what they have learned.

Master Frank Rabon is proud of the program and what has been accomplished saying, “Bunito I dinaña taotao tano yan I kinahulo’ atdao para I Kotturan Chamorro.” (Translation: It is beautiful that the unification of the Chamorro people and the people of the rising sun (Japan) to come together in the preservation of the Chamorro culture.) 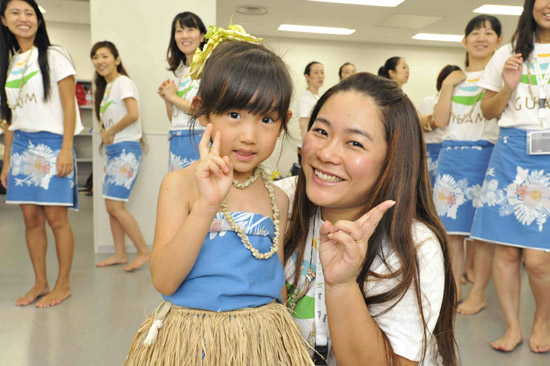 [Asami Nohira San Nicolas (right), the head of the I Taotao Kinahulo’ Atdao na Tano Guma (The People of the Rising Sun) in Japan poses with 5-year old Mao Akiyama the youngest GCDA student to perform at this year’s JATA.]