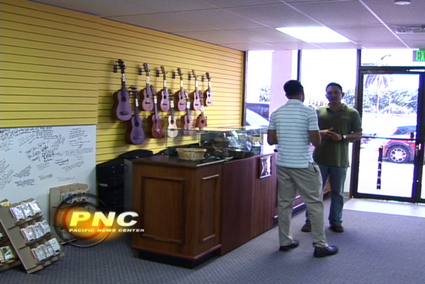 Guam- Police need your help in finding out who burglarized JB’s Ukulele Hut on Sunday.

According to owner Jeffrey Borja, his store was burglarized somewhere between 6:15 pm to 7:45 pm Sunday evening. Borja says he locked up his business at 6:15 pm and it wasn’t until 7:45 pm that one of his employees passed by and noticed a light was on in the back. Once the employee went inside to turn the light off, he noticed the store was broken into.

Borja believes someone came in through the back door after he had left and went straight for the cash register. It also appears nothing else, including his ukuleles, were taken. The business owner also says he believes it may have been someone who has been in the store before.

The amount of money that was stolen during the burglary is still being investigated by police, but Borja is asking for the public’s help in finding out who broke into his store.

“Main thing is if anybody has any information at all whatsoever, just to give GPD a call or give us a call at the store (671) 472-8537” said Borja. “And for all the business owners out there, double check your security systems. Don’t take anything for granted or even for the homeowners, check your personal security for your homes. Don’t think it cannot happen to you because that’s exactly what the thieves are wanting you to think.”

Borja adds he will be beefing up his security enhancements.

JB’s Ukulele Hut moved into its new location at the J&G commercial complex last month. The owner is known for always giving back to the community and the schools in many different ways. Again, if anyone has information on this case, call police or Crime Stoppers at 477-HELP.