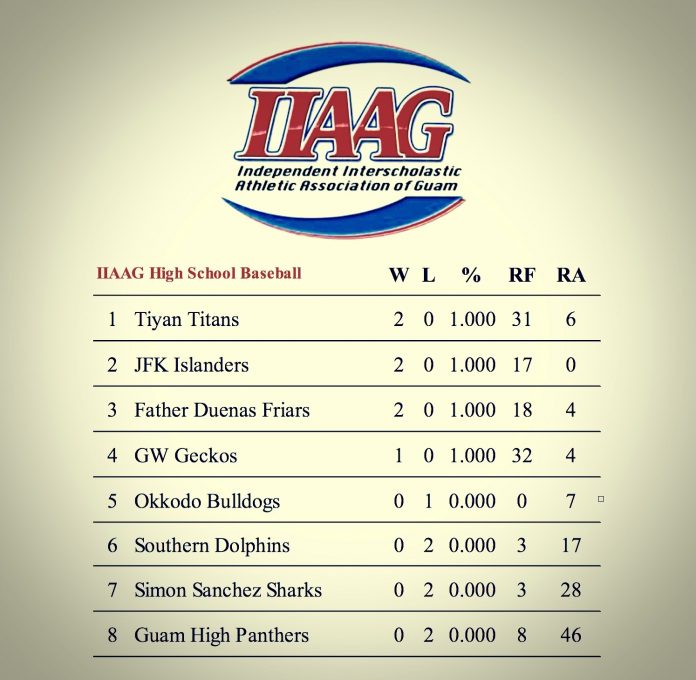 GUAM – IIAAG High School Baseball played two games this Saturday under blue skies at George Washington High School Field.  The JFK Islanders started the action with a 10-0 mercy rule win over the Southern High Dolphins to improve to 2-0 on the season.

The JFK offense scored in every inning but the third inning pounding out ten hits over five innings.   JFK’s Allen Blend would get the Islanders on the board in the top of the 1st inning driving in Thomas Sablan who reached on an error.  Nolan Chamberlain would help himself out with a two RBI single in the top of the 2nd inning to give the Islanders an early 3-0 lead.

The Islanders would put the Dolphins away in the 4th inning scoring five runs on RBI hits by Chamberlain and Asuncion.   JFK would add two more runs in the top of the 5th inning taking advantage of Dolphins errors to reach the 10 run mercy rule and a 10-0 win.

Chamberlain finished 3 for 4 with two runs and 3 RBI.  Blend added two hits and Sablan reached base four times for the Islanders who improve to 2-0 on the season with one game suspended.

Dolphin’s starter Austin Topasna is tagged with the loss going 3 2/3 innings with four Ks and Drake Eber was 2 for 2 in the loss.  The Dolphins drop to 0-2 on the season with one game suspended.

In other action the Tiyan Titans pulled away from the Guam High Panthers and cruised to a 14-4 win.

The Titans would take advantage of seven Panther errors in the game with six of their fourteen runs being unearned.  Up 7-4 in the 4th inning Mark Laanan would deliver a RBI single and Isaac Ignacio would follow with a RBI triple to extend the Titan’s lead to 11-4.

Panther’s starting pitcher Jayce Bukikosa gets the loss allowing five earned runs over three innings with four walks and one strikeout.   Josh Duenas was 1 for 3 and scored two runs as the Panthers drop to 0-2 on the season with one suspended game.