There are 19 active cases of COVID-19 on island.  3 of them are hospitalized. All of them remain in isolation.

To date, 136 civilians on island have tested positive for COVID-19. 5 have died. 112 people have recovered from the disease.

Recovery means a patient is no longer considered infectious. According to U.S. Centers for Disease Control and Prevention (CDC) research and published guidelines, a patient is classified as recovered after at least 72 hours have passed without a fever or additional respiratory issues and at least seven days have passed since symptoms first appeared. 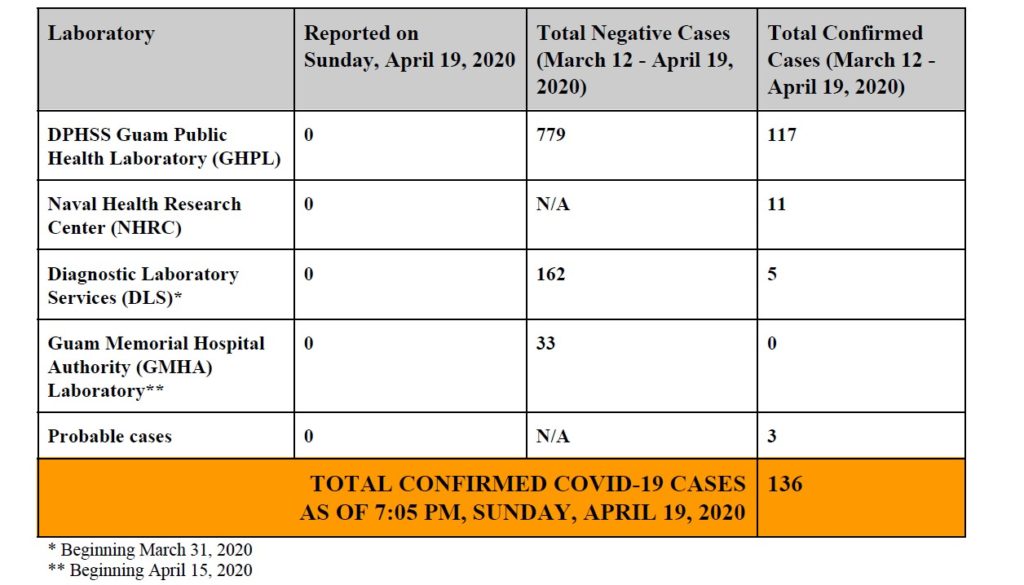 Test Results Over the Past Week

According to the Joint Information Center, DPHSS reports 145 tests were conducted from Monday April 13 through Saturday April 18.

On Monday, April 13, 33 samples were tested by public health, none were positive. 1 case was clinically diagnosed. 134 confirmed.

On Wednesday, April 15, 32 tested by public health and GMH. None were found to be positive for COVID-19.  The number of confirmed cases remains at 135.

On Friday April, 17,  32 were tested. 1 more sample was found to be positive raising to 136 the number of people on Guam who have tested positive for COVID-19.

On Saturday April 18, 7 tests were conducted by public health. None were positive. 136 remain confirmed.

On Sunday April 19, 9 tests were conducted, none were positive.

COVID-19 test results are reported from multiple labs at varying times of the day. T he
cumulative total from all labs will be reported on a nightly basis.