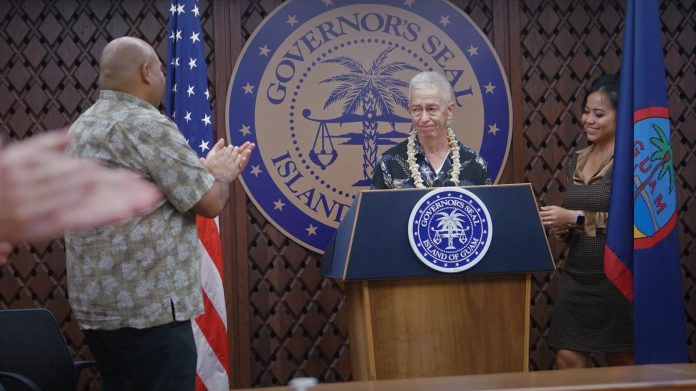 University of Guam’s Chief Hydrogeologist and Professor of Environmental Geology Dr. John W. Jenson has received the highest award a non-native resident in Guam can receive.

The CHamorri Award is an award presented to men or women who are not native to Guam and have contributed to the betterment of its people, and demonstrates genuine and sympathetic interest in Guam’s history, culture, traditions, and the island’s community concerns.

The CHamorri Award was presented to Dr. John W. Jenson–Director and Chief Hydrogeologist and Professor of Environmental Geology.

Acting President of UOG Anita Enriquez had a few words to say as the first speaker of the event.

Enriquez said, “Dr. Jenson is such a blessing, not only to the University of Guam, not only to our island, but also to our region. The many partnerships that he had forged on behalf of the water and environmental research institute of the western pacific is very distinguished and notable.”

Acting Governor of Guam, Josh Tenorio, spoke on behalf of Dr. Robert Underwood– who was the former President of UOG.

Tenorio said, “Dr. Underwood says that Dr. Jenson helped me, this is a quote– the Universty of Guam community and the entire region understand the geological formation of our islands. His research synthesized the knowledge about our water lens, which gives us the tools to understand this valuable research. His work permeates much of what we rely on at the Guam Waterworks Authority, in government planning agencies, in military contracting, and construction projects.”

Tenorio added, “You’ve created, basically a network of experts on island local talent that were able to learn from you, learn from all of the tools that the University of Guam has provided them and all of the experts you have recruited to come in to build a good, reliable program.”

Dr. John W. Jenson is a researcher for the Water and Environmental Research Institute of the Western Pacific of Guam and a Professor of Environmental Geology whose career has spanned 30 years. Some of his notable work includes the creation of the Guam Hydrologic Survey Program and Comprehensive Water Monitoring Program which monitor the health of Guam’s water wells.