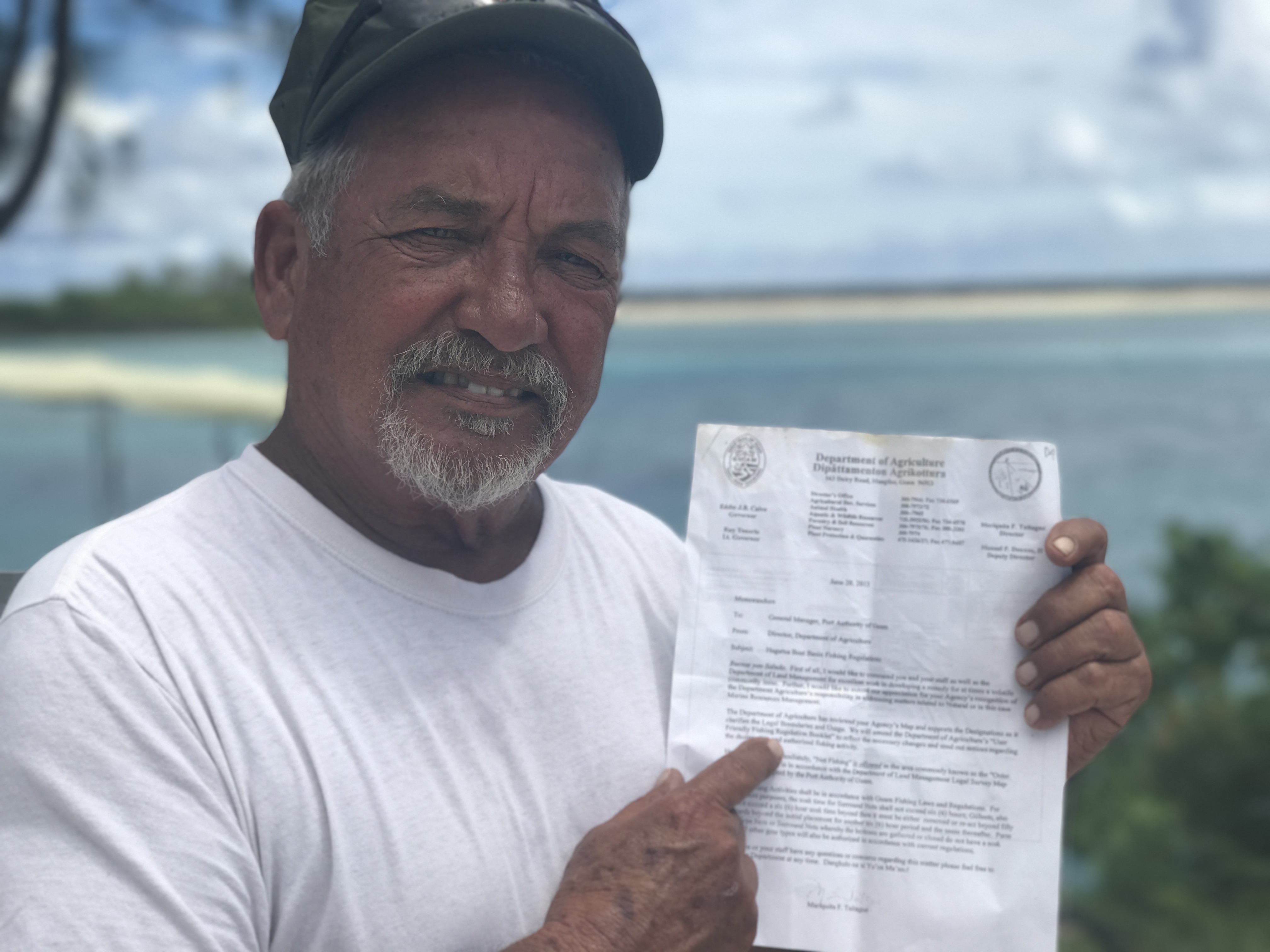 Guam – Local net fisherman Johnny “Atulai” Taitano says he has every right to set his net in the outer harbor of the Agana boat basin and he says he will sue the Port Authority of Guam if he has to.

“This has become ongoing every single year a problem especially with the boys that do the angling and their problem is half of those anglers are aliens. They don’t even have green cards. Why aren’t they working instead of coming down fishing and intruding on my business,” said Taitano.

The long time peskadot (fisherman) says that every time that anglers or rod and reel fishermen complain about his nets in the Agana boat basin the Port Authority of Guam has to try and entertain them.

“But the problem is this is the truth. This is the truth. A written affidavit signed by all the regular forces. You know, that says I can fish in my customary manner right here in the fishing zone that I’m designated,” said Taitano.

Johnny “Atulai” is referring to a 2013 memo from the Department of Agriculture to the Port Authority of Guam that says “hence, effective immediately, net fishing is allowed in the area commonly known as the outer basin.” The memo includes a map that outlines this outer basin area and it is the same area where Johnny Atulai’s nets were set last week.

However, Port Authority of Guam General Manager Joanne Brown says she has reviewed the memo that Johnny Atulai is referring to and she’s found that it is in conflict with a Guam law that prohibits the setting of nets in the Agana boat basin.

“At the end of the day if there is existing law the only way that that can be changed is to amend the law and no action to my understanding has ever been taken to facilitate that issue further and have that formerly adopted under statute,” said Brown.

The Port G.M. says she has no choice but to enforce the law.

“It specifically states that there are two types of fishing practices that are allowed and that is the rod and reel and talaya fishing,” said Brown.

But for Johnny Atulai this is about more than just fishing. This is about cultural preservation.

“I have to continue to fight because the Chuukese are ready to come. They’re already ordering nets. They’re already ordering nets and watching us closely and how we do it. We fall down there’s no young kid’s gonna come up and swing the bat for me and carry on the legend, carry on the legacy, to carry on our culture. Nobody. My daughter, I flew her in from Arizona, we’re the ones who caught this last school. Why? Because nobody wants to learn it and they see the hardships that I’m enduring and they say huh we don’t want none of that business. Let that old man go down. We don’t care,” said Taitano adding, “I been doing this so long and its interred in my bones. It flows in my blood. When they say culture, culture basically is fishing and farming. Well I fish. I don’t wear no big rock around my neck to say I’m Chamorro or I don’t have no brazen tattoo or I don’t dance some foreign hula dance or sing some foreign hula song. I catch fish. That’s all I wanna do.”