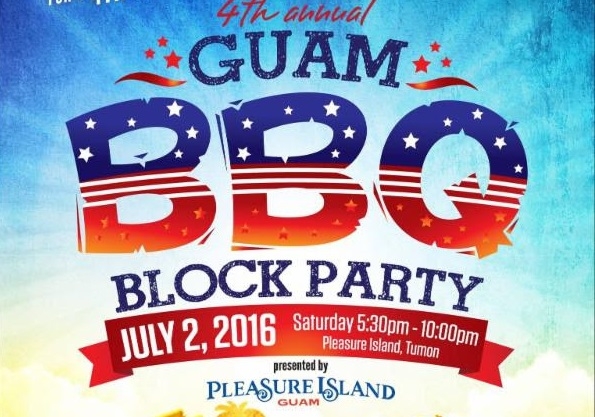 Kick off this Fourth of July weekend with Guam’s ultimate BBQ competition and party.

Guam – No other event celebrates Guam’s love for the grill better than the annual Guam BBQ Block Party…and what makes it even better…it’s being held this fourth of July weekend! This year’s theme is “Red, White and YOU”.

Micronesian Chef Association President Peter Duenas said, “There’s going to be lots of fun, great food, lots of smoke in the air, get people hungry, get to try the bbq shortribs, pork and chicken. It’s like one giant fiesta happening here in Guam happening all at once.”
Like what Chef Duenas said…the enticing aroma of this culinary BBQ party will fill the streets of Tumon. Guam Visitors Bureau explains that this signature event is crafted to showcase Guam’s unique BBQ culture, flavors and the expertise of Guam’s best chefs and pit masters. In fact, ten teams will be firing up the grill to compete and win title of ‘2016 Champion Grill Master’. One of the teams competing is Team Korea.
Team Korea Captain Chef Lee Kang Yeoun said, “We have different recipes for chicken, beef, and chicken so please stop by our booth for samples. It’s really great to be here on island to compete against Guam’s best grill masters. Team Korea will do their best and look forward to this event.”
Along with the BBQ competition, residents and visitors can enjoy live art, music and entertainment. There will be an American Classic Muscle Car and Bike Show, the Hot Diggety Dog Eating Contest, Uncle Sam and the Firecracker Girls and more.
GVB Acting President and CEO Telo Taitague says, “You can see that this block party is growing. It’s not just about food, it’s about fun, enjoying the great things we have on island. Expect next year, we’re going to add more stuff. On behalf of the Guam Visitors Bureau, we appreciate you being a part of this great event that we put on every year not just for visitors but local people as well.”
The BBQ Block Party will be held Saturday, July 2nd from 5:30 to 10:30 pm in Pleasure Island Tumon. Residents should expect some delays in the Tumon area. A portion of San Vitores Road will be closed for the event.